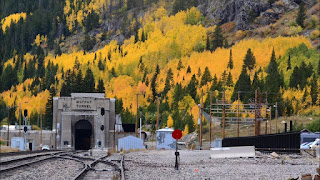 Seeing pictures of mobs panic buying took me down memory road to 1953 when my father was the Denver & Rio Grande Railroad Section Foreman at East Portal, CO., responsible for the tracks in the Moffat Tunnel. 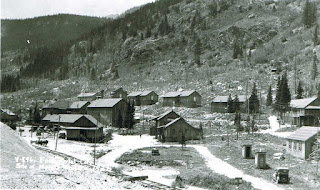 Most of the men were control room operators. The control room was staffed 24/7/365. After a train entered the tunnel, from either end, a canvas curtain came down over the opening and huge fans blew air the entire 6.2 miles of the tunnel. As an eastbound train approached the east portal, the curtain was raised.

The other men were the section crew.

The nearest supermarket was 42 miles away in Arvada, CO., assuming the road past Rollinsville was open and the state highway was plowed. The town, other than the railroad, was often isolated for weeks in the winter.

Flatbed pickups were owned by some residents and shopping expeditions to Arvada were organized. The store manager loved seeing the mob arrive. After all the purchases were made, a flat bed pickup would be backed up to the entrance and loaded.

Dry mix milk was a staple as was powdered eggs. Most residents had chest type freezers. It was simple adaptation to the needs.

Adult recreation was Saturday night at the Rollinsville Stage Stop. Local musicians would play and adults would dance. No television reception was available. 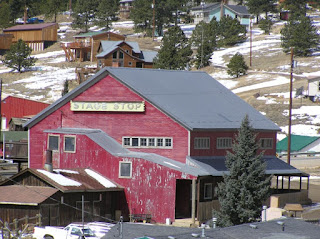 We kids attended a one room school. Recreation was what we could make for ourselves. I fished and roamed the hills with my dogs.

Most people don’t realize how well they can adapt and thrive when faced with challenges, IMO. Root hog or die brings out traits they didn’t realize they had. We will survive the current hysteria and be stronger as a country when it subsides.

A Facebook Page I read, Kiss My American Ass, had this up today.

Pay attention folks, there's much more going on here than what meets the eye. Is it a coincidence that just when the economy is booming, the stock market is setting record highs, we are winning the trade wars, school shootings have stopped, our nation is at peace, the Democratic party is a disaster and so is their likely nominee(Biden). He hasn't a chance in hell & they're not about to let an outsider(Bernie) destroy their scheme. It looks like Trump is a sure bet for reelection after fending off 3 years of investigations and impeachment, then all the sudden world crisis pandemic. Stock market tumbles, companies are laying off employees, everything is closed and canceled, CEO's of giant companies are resigning and indictments are coming. Now they say there are a couple ways a President doesn't win reelection. Those are an unpopular war or a poor economy. But there is something larger going on here driving this sudden outbreak right after Trump beats an impeachment. Especially the fact that it(Coronavirus)originated in China who we are in a global trade war with brought on by Trump. Let's not forget Biden's back door deals with CHINA as well. China doesn't want 4 more years of Trump either. It all seems rather convenient for the nations and opponents of our current President and economy 5 months before an election. Couldn't have hit at a more perfect time. With the Democrats running out of campaign talking points in light of no school shootings, no migrant caravans at the southern border, fighting in Syria winding down, North Korea not firing missiles and Trump beating a sham impeachment. The coronavirus gave them one last hail mary to try and point fingers at Trump with the clock winding down in 2020. This is almost the perfect fascist playbook. Control the population with fear-mongering and panic, control the media, spread propaganda and the fan-favorite disarm the population. Sorry but I don't think we are all going to die. Remember when Ebola was what was going to kill us all, and the media kept showing the piles of body bags that were prepared for the fallout. Then a month later it was totally forgotten. The common flu has killed more people this year already and the media is SILENT! A handful of deaths out of 320 million Americans and we are in panic tearing down our society and costing our economy billions in the wake. It all just seems fishy, a little too well-timed if you ask me.

Enough for now. The dog wants to go for a walk and I need to do my daily mile.

Posted by Well Seasoned Fool at 10:43 AM

You do make some good points... Tonight's 'debate' will be interesting to watch, if it actually comes off...

I'm continually no longer amazed how much SOME of us think alike.
This was fortifying.
Maybe kids will once again learn to play/exercise outside?

My kids played outside as do my grandkids.

It's easy to see a conspiracy in a cloudy day. Sometimes it's just a cloudy day. At other times it really is a conspiracy. The devil is in the details. Just because you're paranoid doesn't mean that they're NOT out to get you, WSF.

The sheep are so dumbed down that they will panic at any little thing, and the media is promoting this big time.
I'm concerned that small businesses are taking a giant hit by this perpetuated folly.
Commonsense has obviously left the building...