My good friend, Dirty Al, is a character. He has been a soldier, a mercenary, a bail bondsmen, and the best car salesman I've ever known. His eyesight was bad all the years I've know him.

Last year the VA fixed his eyes. They removed cataracts and fixed a detached retina. His vision has been restored to nearly perfect. When I asked him if the quality of his life has improved, he said greatly, except the county has put up a lot of stop signs since his eye surgery.
Posted by Well Seasoned Fool at 9:36 PM 4 comments:

What Does It All Mean?

I use three different spell check programs. None recognize the word "Obama". Is there something sinister going on? Some programmer's sense of humor? Nothing at all? Inquiring minds want to know.
Posted by Well Seasoned Fool at 5:10 PM 3 comments: 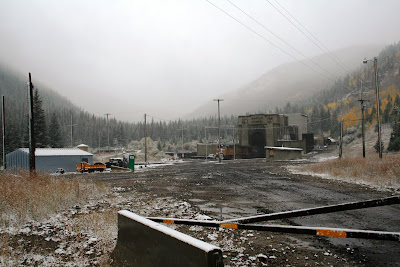 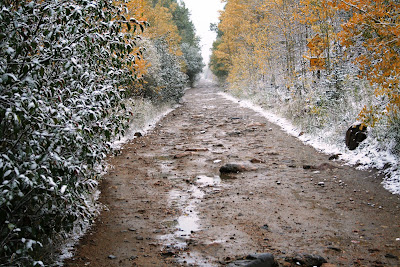 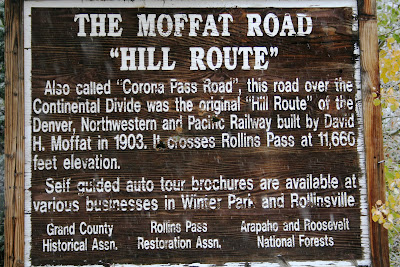 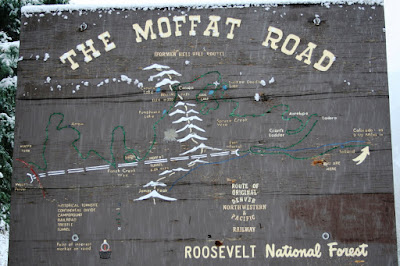 Planned today to drive to Yankee Doodle Lake on the old Denver and Rio Grande Northwestern right of way over Rollins/Corona Pass. It was snowing but no problem; that is why we have 4x4. The pinhole leak in a coolant hose made a good case for not pushing on. Any evidence of common sense on my part is shocking to my family members, relatives, and friends but there you are. In the 1950's, when you could still drive the entire pass (before a tunnel collapsed), my father broke down near the summit and had to hike down ten miles in cowboy boots. As much as I admired him, that is one of his experiences I don't care to duplicate.

The pass was abandoned after the Moffat Tunnel was completed. In the early 1950's my father was the section foreman responsible for the tracks in the Moffat Tunnel. His father and an uncle traveled over Rollins Pass by train on their way to Northwest Colorado to homestead land. My sister's first home was at East Portal. I caught my first fish in Yankee Doodle Lake.

The area is popular with the ORV enthusiasts which is why I avoid the area on weekends. Colorado can be an aggravating, high maintenance place to work and live. For me, the mountains make it worth the effort.
Posted by Well Seasoned Fool at 1:23 PM 7 comments:

Went to a city park tonight for my daily exercise walk. When I pulled into the parking lot (Yeah, I drive to find a place to walk) saw a policeman with his firearm out pointed at a shirtless man prone on the ground. Moments later there were several police cars and ambulances in the lot.

Not wanting to be a distraction, I stayed in my car until they had handcuffs on the man on the ground. Found it interesting the lone officer stayed about ten feet from the man being cuffed until help arrived. He maintained his distance until the second officer had the handcuffs secured.

Avoiding the activity, I started my 1.4 mile loop. When I came back to my parked car they were still there. The handcuffed man was sitting on his butt and there seemed to be an animated discussion taking place. The ambulances were gone.

I was quite curious but decided to MMOB, walked to my car, and left.

This is probably a boring blog but it has been an uneventful week.
Posted by Well Seasoned Fool at 10:37 PM 1 comment:

The following is a copy of a comment on CommonDreams.org posted by "Glenn Ford".

The left and right and middle have irrational, ignorant and/or violent people.

The left, right and middle also have rational, intelligent and peaceful people.

One who excludes a whole spectrum of political philosophy as being unapproachable and of no value is a politically unsophisticated individual.

Obviously the current us and them dichotomy has been a disaster.

Us and them is always a disaster on any level or in any context one may employ the use of us and them dichotomy.

This system has become highly powerful under a split political citizenry and simple mathematical and spiritual and political analysis and logic says a new paradigm of a united citizenry is the only power that will defeat the current corporate strangle hold.

And when one mentions revolution no one should assume violence but the word revolution must become comfortable before the reality of revolution will exist.

I don't agree totally with what he is saying. To borrow a line from former State Senator Ken Gordon, D CO, we spend too much time talking to people who agree with us.

There is a time and place for taking a stand no matter what. Long before that time and place are many times and many places for civil discourse with those with whom we don't agree. It isn't fun, comfortable, or uplifting but it is important; be it a family, a business, an organization or our country. I don't like Obama and will work to see he isn't reelected. Right now, he is the president and this country cannot keep drifting while the world's wolves are circling looking for an opening.
Posted by Well Seasoned Fool at 9:35 AM 2 comments:

Looking out my window this morning, I saw a woman park in the handicapped parking spot and walk to the employee entrance. This is not the first time I've seen that car parked there. After thirty minutes I went out and checked for handicapped decals. Finding none, I wrote down the license plate and then called city dispatch. Guess this makes me a snitch.
Posted by Well Seasoned Fool at 8:37 AM 6 comments:

Another car lot story. We had a previous customer visit our lot in an unusual way. The four lane street in front of our lot had a very high crown causing vehicles to drift to the right. Between the sidewalk and our fence was room to display three vehicles between our two entryways. One evening we watched a S-10 pickup drift from the inside lane to the curb and into our driveway without slowing. He hit the first vehicle, a Toyota pickup, squarely in the rear pushing it into the back of a Chrysler Le Baron which hit a Ford Probe. We later learned the driver had purchased the S-10 from us. Running up to the wreck, I could see the driver flopping around in his seat belt; he had a grand Mal seizure. After contacting 911, the dispatcher started asking questions. She told me it was important to keep the man from swallowing his tongue and she could talk me through the procedure. I could hear sirens approaching so I told her I wasn't sticking my fingers into any stranger's mouth. While she was discussing my attitude, the professionals arrived. His seat belt had saved him from serious injury and he was soon on his way to the hospital. In due course we learned his insurance was lapsed. We were out our $500 per vehicle deductable plus whatever profit we may have made. Expensive afternoon. We blamed it all on Discount Tires. Click the "Unhappy Customer" post title to watch a video.
Posted by Well Seasoned Fool at 6:45 PM 1 comment:

Lots of arguments about traffic tickets as a revenue source. This is one case. I was managing a small lot in a Denver suburb when I had a car stolen from the lot. The lots was next to the local police duck blind on a four lane street headed downhill to the South. A cheap gas station was next door with two driveways shaded by trees. The North side of the station had a high wooden fence nearly to the sidewalk. The motor officers could sit under a our tree, hide behind our cars, and see a block and a half to the North and a full block to the South. Unless you were looking for him, Officer Friendly was hard to see.

I was rearranging the lot and had all the keys on the vehicle roofs when a customer came in to make a payment. A police motorcycle was sitting under our tree. I went inside long enough to write a receipt and came out to find our Mitsubishi Galant VR-4 gone. The empty space was directly beside the policeman. I ran up and informed him our car had just been stolen. He told me to call 911! WTF! Guess he was more concerned with writing tickets than catching a car thief.

Well I called 911 and soon had three cruisers on the lot but the car was long gone and never recovered. Rare car, only 3,000 were imported.

We had a decent relationship with the police and they always came quickly. The lot was in a high crime area. When I asked the street cops about the motor cop, they looked embarrassed - guess they didn't like the ticket writer squad either. At least, they didn't back him up when he finally strolled over and I told him to never park his Ramen eating, gutless, lazy POS, tax collector dressed as a policeman ass on our lot again. Seemed to upset him. He looked at the the other officers who looked back at him. He then went back to his scooter and drove off. After thanking the other officers for responding and finishing the theft report, we all went back to work.

Two days later a shift supervisor stopped by and we talked. He told me they had six motorcycle officers who did nothing but work traffic. Nice guy, we shared a cup of coffee and he looked over our security and video set up. I did monitor my driving closely within that city after that.

Guess you always have one in every group. In later years one of my sons lived within that jurisdiction and had numerous contacts created by his psycho meth head girlfriend. Their response was always professional. I still heartly dislike the way they work their duck blinds.
Posted by Well Seasoned Fool at 7:44 PM 4 comments: