Fall Far From the Tree?

Work took me to a Wyoming resort town where I spent a day making sales calls with the customer's outside saleswoman, Mrs A. We started swapping small town stories and I shared one about my father.

My parents had the only White Volvo 122 in their county. One day my father noticed a White Volvo pull up so he jumped in the passenger side saying, "Where are you going, honey"? Not his honey, not his car.

About two hours later we were leaving a business when I took a cell phone call. We were riding in Mrs. A's White pickup. Finishing my call, I opened the door, got in, and asked, "Where's our next stop"? "What do you have in mind"? replied the well dressed, very attractive driver of the Audi station wagon I was sitting in. Outside, I could see Mrs A holding on to her pickup and laughing.

One benefit of being a lifelong fool is having lots of practice dealing with embarrassing situations. Order was soon restored, apologies made, and on to the next stop.

I do regret not being able to ditch Mrs A.
Posted by Well Seasoned Fool at 9:56 AM 1 comment: 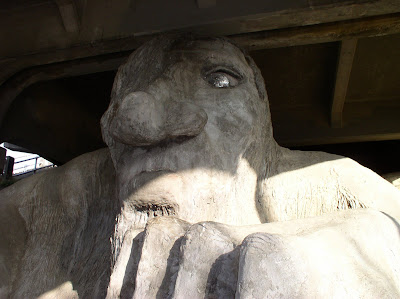 Criminals are predators. They view their victims as a resource to be exploited. They have no more compassion for their victims than a coyote has for a rabbit. In their heart of hearts they feel they are entitled to their actions. I am frustrated with those opposed to firearms (firearm, not gun, unless you are referring to a shotgun) who ignore that which is obvious. Every creature on Earth will fight for their survival. A firearm is a great equalizer.

Freedom isn't free and our exercise of our freedoms with firearms will have collateral damages; it is the price we pay. Are there people who should never have a firearm? Of course, and sadly, that includes some of my family members.

Automobiles give us great freedom of movement. Misuse results in horrific collateral damages. Do we try to minimize damage via laws, training, fitness tests, etc.? Of course. Automobiles are used in drive by shootings. Lets stop drive by shootings by banning automobiles. Make sense to you?

Now we are being blamed for the problems in Mexico; a country that has kept their citizens disarmed for decades. The predators in Mexico are well armed because they are CRIMINALS!

Until our "leaders" can show me how they can control predators, I will keep close at hand my tool for predator control. Your mileage may vary.
Posted by Well Seasoned Fool at 12:37 PM 4 comments:

Decades ago, in a small mountain town, my mother was a leading light in Real Estate sales. Known as Sainted Demented to her children, SD embarked on a campaign to have traffic lights installed. The town was growing and the lights were needed. She started raising hell at every forum available to her; Chamber of Commerce meetings, Toastmistress, City Council meetings, dancing at the El Strangle,etc. She ran for City Council with traffic lights as her issue. She lost which was a good thing; the council meetings would have been acrimonious had she won.

One afternoon SD was pulled over by the Chief of Police. After securing her license, he asked her to exit her vehicle. "SD" he said,"What is that hanging over the intersection"? "Oh Ab, you've put up the traffic lights", she replied. "Why, yes we have. Didn't you see them working right outside your office window? And guess who has the honor of receiving the very first ticket for running a red light in this town?" The Chief replied. "Some day's I just LOVE my job."

To those of us who know and love her, four things stand out. She paid the ticket without complaint, her license wasn't expired, her inspection sticker was current and the license plate on her car was current.

Witty remarks about what tree I fell from are not required.
Posted by Well Seasoned Fool at 9:14 AM 1 comment:

You Want a Trailer??? 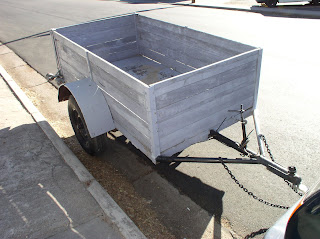 Happy to bring it on any trip.
Posted by Well Seasoned Fool at 6:31 PM 2 comments:

A legendary auto sales trainer, Jackie Cooper, was fond of saying, "Winners do what losers won't". Combine that outlook with tunnel vision, no patience, and less than stellar driving skills and you have a considerable "downside" potential. Over the years I have been banned from driving vehicles up display stands and pulling trailers.

My first ban came after a customer expressed a desire to see the underside of a 4x4. The shop was closed but a display stand was open so I pulled the truck up the ramp to the stand. Unfortunately I drove off the side of the ramp and the truck landed on its side. Took a wrecker to set it upright. While waiting for the wrecker, the customer was able to examine the underside to his complete satisfaction. After making a price reduction we made the sale.

The trailer ban came about when a problem kept the customer from taking a 40' tilt bed trailer home. I agreed to deliver it the next day. The fact I had never pulled that long a trailer didn't seem important until I turned a corner too short and dragged a new car into another new car with the trailer wheels. The trailer wasn't damaged and I was able to deliver the trailer without wrecking anything else. My employer then banned me from ever pulling a trailer. Of course, these things get forgotten in the heat of battle and, over a span of several years, he had four more reasons to keep the ban in effect.

In the next few weeks I need to trailer a Class B RV from Pierre, SD to Colorado but am having a difficult time borrowing a truck and trailer. I thought these people were my friends!
Posted by Well Seasoned Fool at 4:24 PM 8 comments:

Received a request for a "war story". Between Basic Training and Engineer School at Ft Leonard Wood I was trained/licensed as a truck driver. The promise, by the 1st Sgt, was exempt from KP if we volunteered. He was true to his word but circumstances and subordinates changed the rules. One morning a KP from my platoon became ill and a replacement was needed; ME. Despite my protestations that I was exempt I was dispatched to the Mess Hall where I was assigned to pots and pans.
Pots and pans were cleaned outside the Mess Hall on a concrete porch open to the elements. I was not a happy camper.

"Edible" garbage was placed in barrels and collected by civilians for hog food. Pamphlets can be written on the process. The civilians had become accustomed to ordering trainees around and that afternoon two pulled up in their truck and one said to me, "Boy, throw them slops in my truck". I told him to commit an improbable sexual act upon himself and continued to clean pots. He decided to teach me a little lesson so I put him head first into the slops. His partner came to his rescue so I hit the partner with an oversized aluminum pot. At this point the Mess Sergeant came strolling out. He sees his KP drowning one civilian in edible garbage while the other civilian was holding his bleeding head. Ordered by the Mess Sergeant to report to the Orderly Room, I was soon standing in front of the 1st Sgt. He ordered me to put on a clean uniform and come back to wait for the Company Commander.

The CO wasn't in so I sat, in a clean uniform, and waited. The 1st Sgt got the whole story from me. He asked, "Aren't you one of my truck drivers? Why were you on KP"? As I sat waiting, the 1st Sgt went into the CO's office and shut the door.
I could hear muffled laughter. This happened several times. The CO arrived and he and the 1st Sgt had a conference. I was then sent back to my barracks.

I spent the next week during my "free time" double timing around the Battalion area in full pack, pot, and rifle but no Article 15 and no more KP. I did receive a mark on my record that kept me from getting a Good Conduct Medal. Oh well.
Posted by Well Seasoned Fool at 10:29 AM 3 comments:

My niece sent a link for her son Kaeden's soccer team. He is wearing #5 and his name is misspelled Caden. The link is http://www.sparkseclipsesoccer.com/Home Page.php After the site comes up click photo album.

Oldest son is now two weeks without a cigarette. He is using the patch and seems motivated to be tobacco free.

Youngest son is dealing with boot camp and being away from his wife and kids.

For other readers please understand we are part of two large clans. I have (living and dead) over 50 first cousins. This blog helps keep the interested ones informed.
Posted by Well Seasoned Fool at 3:31 PM 2 comments: