What Can You Say?

My buddy DA asked for another car lot story. In the business you occasionally get an older car with very low mileage on trade. We took in a 10 year old Buick with 9,000 original miles, garage kept, with no scratches, dents, stains, etc. Like new.

My prospective customer for that car was an 82 year old retired chiropractor who was driving a monster Chevy Blazer. He and his wife had decided to give up camping, didn't need to pull a trailer, and wanted to downsize. Neat couple. In their case, age was truly just a number. We made an appointment and I buried the Buick in the back of the "bull pen" after putting a pencil eraser inside one of the spark plug boots. This kept the other salesmen from selling it before "my" customer could come in. Losing the keys is for amateurs. The cost of replacing keys is totaled monthly, divided by the number of salespeople, and then deducted from their pay. While you can usually get a locksmith to the lot in thirty minutes, the lazy bones service department will take three days to touch a car even if every service bay is empty.

My customer arrived and we headed to the bullpen. Walking back to the Buick we passed a car with fogged up windows. Figures could be dimly seen moving around in the front seat. As we approached the car, the driver's windowed opened slightly and the male occupant asked, "Uh, Tank, do you want to look at this car"? The female occupant was making wardrobe adjustments. "No, John, we don't want to look at this car", I replied. "Oh, good", was his reply.

As we walked on the customer asked me what that was all about. What to say?
One sales trainer I studied had some advice that seldom failed me. He said, when backed into a verbal corner with nothing to say, let your mind go blank, open your mouth,, and whatever comes out will work. "Mr. Customer", I said, "That was our special finance manager. I think he is working out a down payment." Thankfully, the customer laughed.

The Buick was soon sold for a nice gross profit. The customer was delighted. The Blazer trade I was able to sell a few days later. John made his deal too.

Somehow, the store Owner's wife found out what happened, prompting a rather heated meeting with the General Manager. Got to love the car business. Where else can someone call you "A kinky blankty blank" and it is a compliment?
Posted by Well Seasoned Fool at 5:54 PM 3 comments:

My house guest, Deuce, is still here. Youngest son and family have found a house and are moving in this weekend; took longer than expected. Will take Deuce back to them on Thanksgiving.

Daughter-in-Law has no sympathy. She points out she could keep the dog and give me the four kids! Love my grand kids but...........
Son is happy to be out of training and in the professional Army. Likes his unit and the people he has met. Life is good.
Posted by Well Seasoned Fool at 4:35 PM 1 comment:

This past Monday I reported for jury duty along with approximately 150 fellow citizens. I'm sure they were thrilled, as was I, to be there. Sitting and waiting, I started thinking of various duties we citizens undertake.

The use of militia, as I understand history, goes far back in time. On this continent, militia service wasn't an option. Every free man was expected to be armed and to make himself available in times of need. For a militia to be effective, some order was needed; a well regulated militia.

The National Guard hasn't replaced the militia. It is more of a reserve component of national defense. I think the modern militia is found in Sheriff Posses. At least in the Western rural areas, most counties have an organized Sheriff Posse. An argument can be made that groups like the Deacons for Defense and Justice are militia. It seems to me the 2nd Amendment allows groups to organize and defend themselves from outside dangers or tyranny and this can't happen unless each individual has the unfettered right to own arms.

As to the jury duty, after about three hours I was dismissed. The individual was accused of embezzlement over a four year period, perjury, and attempted bribery; some fourteen counts in total. The judge estimated the trial would last several days. Like a military draft, I reported. Had I been selected, I would have served. It is all part of being a citizen.
Posted by Well Seasoned Fool at 5:51 PM 1 comment:

Duece is staying with me until his family is moved into their new home. I'm enjoying him although we are still working on the pack leader issue! He is one strong dog.

I like dogs and miss having one. Spending 10 - 15 nights a month in a motel for the past decade or so kept me from getting one. Changing my lifestyle opens the possibility for having a dog.
The breed I'm considering is a standard poodle. I've been around several and back in the day my sister had one.
Soon Duece will be back taking care of the four grand kids and youngest son. FDIL will be thrilled! Sort of a love me, love my dog.
Posted by Well Seasoned Fool at 12:57 PM 4 comments:

One of the blogs I follow is OccultBlackMetalZine. I don't understand it. The author is my middle son. He does understand his subject, is well read as anyone you will meet on philosophy. The last time I helped him move his library filled six totes.
Posted by Well Seasoned Fool at 10:09 PM 1 comment:

Received an email asking for another flying story from the past. A Super Cub needed to be ferried from a small Wyoming airport to Colorado. My employer purchased it, sight unseen, over the telephone (his common practice). One June morning I was dropped off at the airport to fetch it.

The airport operator wasn't friendly. His attitude I understood. Operating at a small airport was a marginal proposition at best. Losing any airplane based there cut his income. Further, he loathed my employer as he made very clear to me. He refused to give me the SC keys.
The SC was tied down in a plowed rectangle approximately 200' by 500' behind a hanger. Head high snow banks enclosed the tie down area. The only access was through the hanger. When I asked the FBO for access he offered me the use of a shovel.
Failure to complete the job was not an option. Had I called my employer, he would have told me to catch a bus to any destination of my choice. After an hour of deep thought I made a plan.
This being Wyoming, a stiff breeze was blowing. The wind was blowing across the 500' dimension of the tie down area. Using a small tool kit I carried, I removed the key cylinder from the Magneto switch. Leaving the tail tied down, I prop started the SC after a detailed preflight inspection and allowed the engine to idle for several minutes. Untieing the tail, I dragged the tail over to a snow bank and lifted the tail wheel onto the snow bank.
After putting on the seat belt and applying the brakes, I went to full power and adjusted the mixture to compensate for the 6,300' altitude. Releasing the brakes started the takeoff roll. The tail stayed up and I was able to hold a negative angle of attack which helped the acceleration. At about 300' the airspeed indicator started working and I lowered the tail slightly. With about 50' left, ground effect kicked in and we cleared the snow bank easily. Aborting the takeoff was never an option. My plan was bring the stick back hard and bounce over the snow bank. Happily, that wasn't necessary.
Although sorely tempted to give the FBO a good buzz job, I refrained. Given the small world we all operated in, I know there would be a future opportunity to kick his ass. The trip back to our base was pleasant and uneventful.
The Super Cub is a great airplane. Even with 85 h.p. and 6,000+ altitudes it performs well. 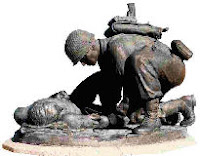 With apologises to readers, the first post on this topic was deleted because of some incorrect assumptions on my part. That being said.......

Youngest has completed his 68W combat medic training at Ft Sam Houston and is now home with his family. His duty assignment will be an armour unit less than two hours for me. Puts the grand kids six hours closer; that will be tough to handle!
His primary motivation for joining the army, later in life, was financial security for his family. His profession is degraded by illegal immigrants, the scum that hire them, and the economic downturn.
He had the good fortune to meet, and the good sense to marry, a loving woman who has all her s*#t in one duffel bag. For seven months she has taken the job of the kids, dog, and home on alone (and done quite well).
Given his MOS, in due time he will go in harms way. Like millions of parents, I will worry and pray. Until then, I am going to enjoy this time.
Posted by Well Seasoned Fool at 7:17 PM 2 comments: