Another car story requested. This one explains why it isn’t smart to be rude.

The dealership, to build customer traffic, had weekend advertised specials. The prices were low because every bit of profit was stripped. The vehicles were usually base units with few extras. Salespeople were paid a flat $50 commission.

One Saturday we had a proto typical Subaru customer; a skinny, bitchy, uptight schoolteacher, about thirty, with a sneering, superior attitude. Her male companion had long ago surrendered his gonads. She probably had them in her purse. “Take a turn,” the manager told me. Oh joy, prime selling time consumed for a deal that would net me $25.

The customer offered $2,000 less than our sale price. She was insistent her offer be presented to the manager. I insisted she make a firm commitment; signed offer plus “earnest money". We argued. I told her the manager was going to yell at me for bringing him such a low offer and I wasn’t getting yelled at for not bringing him a firm offer. Finally, she produced a credit card and signed the offer sheet. On my way to see the manager, I copied the credit card front and back and put the copies away. The manager had me return her card and throw her and her companion out (politely).

Have you ever tried to cancel a magazine subscription? About six weeks later at the public library, I gathered subscription forms from the magazine section.
Big Beautiful Woman, Hot Rod, Field and Stream, etc. were ordered and prepaid. A lifetime membership in the NRA was part of the package.

Yes, I am a vindictive, low life, backstabbing sorry excuse for a human being. Deal with it. Way past the statute of limitations.
Posted by Well Seasoned Fool at 8:05 PM 2 comments:

So a young friend asked me, “What is a Democrat”? Hard question to answer. I could only tell him where I come from.

In business, there is a principal called “The Laws of Adhesion”. Simply, in a contract, the stronger party cannot dictate terms unfavorable to the weaker party. The contract is unenforceable if challenged in court. I believe the principal should apply to most facets of our lives.

MY Democratic Party WAS the champion of a level playing field. What it has become is something I don’t recognize.

To me, the Republicans are the “I’ve got mine, screw you” Party. Since the majority of my relatives are Republicans, we have outrageous arguments and nullify each other at the polls. I see little difference between the tactics of Tom Delay and Nancy Pelosi.

This election I find myself working to elect two Republicans for Congress and two others for county offices. The incumbents I cannot support.

In past blogs, I’ve talked about getting involved at the local level. That, and being a campaign volunteer are ways I can, in a very small way, push my views. For a past blog go to:

So irritating, getting people off their ass just to vote, let alone get involved.

Perhaps I cannot fit under a "Big Tent".
Posted by Well Seasoned Fool at 10:39 AM 2 comments: 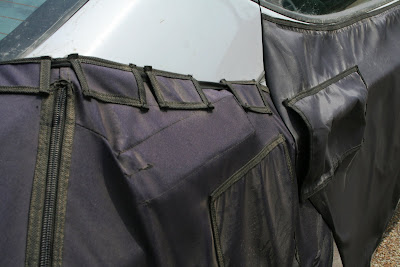 The job involves moving pre-production cars between test locations. Some are disguised with body cladding to obscure styling details.

Recently, while experiencing the joys of HWY 287 paving projects, we were first in line. The flagger and I had a LOT of time to chat. “Is your car cold?”, she asked. “Is that why you have it’s jacket on?”

Got to watch out for those Baca County women.
Posted by Well Seasoned Fool at 10:38 PM 2 comments:

Son in Afganistan has started blogging. You can read it at

Please stop by and say hello.
Posted by Well Seasoned Fool at 9:05 AM 2 comments:

When a recent business meeting, held in the capital city of the Peoples Republic of Boulder, ended, I had lunch with a group of ultra liberals. The subject of gun control was raised (not by me). “Why”, asked one, “Are you gun nuts against any sensible gun control measurers.”? “Because”, I replied, “You gun grabbers are liars”. After I made the point that labeling someone as a gun nut or gun grabber didn’t lead to any reasoned exchange of views, we, as a group, had an actual conversation.

I stressed we all have a mutual interest in curbing criminal behavior. Gun owners are not giving up their firearms. Gun control advocates will not find any common ground with gun owners so long as they use deceit as a tactic, i.e., the “Gun Show Loophole.” Or tolerating a system where Veterans, who put their asses on the line for our rights, are administratively deprived of those rights if they truthfully answer certain questions asked by the VA. That patient/doctor confidentiality is compromised. Thank you, Sen. Shithead. There are many examples but I used those two. To my surprise, some of the group saw merit in what I had to say.

The people who don’t like firearms do have one valid point; safety. We’ve all seen them, the yahoos whose unsafe practices make you want to dive for cover. Those of you who are range officers all have examples to share. These yahoos scare the hell out of folks and, right or wrong, they see all of us in that light.

One modest proposal. Most states have a requirement for a hunters safety course and endorsement before you can buy a hunting license. Can’t this be used as a framework to insure more firearm owners have some basic safety and handling instruction? It is a requirement in Colorado before getting a CCW permit. Have what you want on your own private property. Be required to have a valid safety card to have a firearm in public.

If something like this was offered by the firearms community, I think some of the opposition would be in support. The result would be a safer country, the fanatic gun grabbers would have fewer allies, and it could be a bulkhead against more extreme proposals.

Enforcement of existing laws isn’t consistent. We had a period of time in Colorado where the firearm laws were enforced and the enforcement advertised, much like DUI laws, Violent crime went down. An ambitious federal prosecutor was setting up a run for the US Senate (failed). With his departure, the effort died down. What I hear from the law enforcement, courts, probation, and corrections communities, is the system is so overloaded with drug cases, DUIs, and domestic violence cases that compromises must be made. The problem is, compromises become excuses and the status quo.

Age hasn’t made me a total cynic. I still believe reasonable men and women can find common ground for common purposes. Your mileage may differ.
Posted by Well Seasoned Fool at 6:03 PM 4 comments:

Just what you want to see, your son, in a war zone, standing in front of a IED damaged vehicle of the type he drives!

The picture is downsized for OPSEC. The original is 1.54 MB. You can see individual cords in the ripped tires.

Since I didn't raise him to be weak and fearful, guess I have no one but myself to blame. Like most parents, I suspect, I would trade places with him just to keep him safe.
Posted by Well Seasoned Fool at 9:15 AM 3 comments:

Old NFO’s post http://oldnfo.blogspot.com/ on SWATH vessels brought back a fond memory, though only marginally related.

Every year Seattle has Seafair Week and the Navy brings in several ships they open to the public. I imagine this is a royal pain for the Navy personnel. One year I took my then preteen younger two sons to the waterfront to see the ships. The lines for the carriers and other big ships were way too long for us. Off on it’s own was a ship with no lines so there we went.

The ship was the USS Pigeon (ASR-21), a catamaran hulled submarine rescue ship. We were aboard three hours and saw everything from the keel up. During that time, there were perhaps ten other visitors. Obviously, a bored crew happy to have visitors. At one point I breathed a helium/oxygen mix, then did the Donald Duck talk, much to the delight of my sons. The visit, for my sons, was a great adventure. I enjoyed the chance to compare Navy service to my Army service. My only exposure to the Navy, at that time, was fourteen days on a troop ship (General Rose).

Sorry, recruiters, the visit didn’t make my sons interested in joining the Navy, but it remains a fond family memory.
Posted by Well Seasoned Fool at 8:55 AM 3 comments:

My friend, Dirty Al, once lived in a large apartment building in a Tacoma, WA, declining neighborhood. The busy street in front had a large, rowdy nightclub which was frequently visited by the police. Down the street was a large AA meeting room (where Al trolled for women).

Al, being a former bail bondsman and repossession agent, claimed a trained observer could tell which residents in the apartment building had outstanding warrants by whose shades remained drawn when police activity happened at the nightclub. Those with nothing to worry about were hanging out their windows watching the drama.

Middle son lives in a similar apartment complex. The attraction, for him, is cheap rent. As I’ve said in past posts, he looks like a character out of a slasher movie, and nobody bothers him.

Recently, I waited for him to get home from work and parked for forty minutes in the lot. I backed into a space with shade and a good view of entrances. What a hoot watching the residents pull in and out! Was I “The PoPo”? The “Hook” (repo man)? Process server? Bondsman? La Migra?
Seemed like one out of three residents were very nervous.

Seems to me, if not for the pesky probable cause requirement, the police should have little problem arresting prior offenders just by observing their behaviors.
Posted by Well Seasoned Fool at 3:06 PM 3 comments: