No Horses, No Thank You

"Your cows are out” is a terrible telephone call for ranchers to receive, especially when their place is on a busy road. This happened to two friends I was visiting.

They, like many in agriculture, have town jobs to pay for their ranch addiction. One night coming home they hit an elk, rolled their truck, and both were seriously injured. I had stopped by to see how they were faring.

We got in my car and drove to the cows. The beasties wouldn’t be herded by a car and arm waving so back to the ranch where I saddled a horse.

I was riding a horse alone before my fourth birthday. My late father was the best rider I’ve ever seen. The second best is my sister. An uncle, third. Me, the grace of a sack of potatoes tied to a saddle horn. I don't dislike horses until they decide not to do what I want. Then we stop being friends.

Their horse and I sorted out who was the boss, then went off and rounded up the bovines, without any injuries from traffic. After fixing the fence (the most common cowboy job there is), it was back to the ranch, unsaddle the horse, and time for an adult beverage.

Sly grins were coming from my friends. Finally the husband speaks up and asks, “How long has it been since you have ridden a horse”? My reply, “Probably thirty years.” After several less than complimentary remarks about the way I sat a horse, that kind of talk was terminated with just one question, “Are your damn cows in”?

True cowboy’s main endeavors are fixing fence and stacking hay. Entering the Army, I looked forward to driving a tank or shooting a large gun. The Army made me a Combat Engineer where I worked with barb wire and stacked sandbags. At least there were no damn horses.
Posted by Well Seasoned Fool at 6:48 PM 4 comments:

Had a complaint about no new posts. Thought of it as a favor to those who occasionally pause here but here is another post.

One time a very nice couple had three children, two in car seats, and a two door coupe as their only car. He was a state trooper and we always tried our best with first responders and military. With some "creative" paperwork, we managed to qualify them for a loan on a decent minivan.

A few days later a nice couple bought a nice SUV that had undergone a rigorous safety inspection in our nationally renowned service department (where they failed to tighten the lug nuts on a rear wheel). After taking delivery, the customer made it eight miles before a wheel came off. The customer was extremely upset when, as luck would have it, our state trooper customer came upon the scene. Their conversation went something like this. "I just bought this thirty minutes ago at Raggedyass Ford!" "Really, I bought as car there last week. Who was your salesman?" "The Tank!"
"Wow, he was mine, too. Let me give him a call".

I got the call, asked him to call a wrecker, and drove down and picked up the SUV customer. He got to drive a brand new SUV free for a week until his vehicle was fixed to MY satisfaction.

It was quite satisfying to feed that $1,900 loser to Mr. Big Shot Service Department Manager. Might I add we were not mutual fans before this?

The SUV buyer was happy. His vehicle was fixed and he had a good story to tell. The patrolman was happy as he was able to repay my favor by assuring the SUV buyer I would take care of the problem. I was happy to have two more customers sending me referrals. The Service Manager wasn't happy which didn't bother me at all.
Posted by Well Seasoned Fool at 7:02 PM 1 comment:

A near universal phrase, used by the anti-gun crowd, is “Common Sense" gun laws. What does that mean? Who’s common sense, Sarah Brady or Wayne LaPierre? How can you have “Common Sense” when you are willfully ignorant? When you can’t even explain what the “gun show loophole” means?

They are afraid of guns, don’t like guns, and are made uncomfortable by guns. Their “Right" not to be uncomfortable supersedes, in their entitlement mentality, any other point of view. “I said it, it is a fact” is their unspoken mantra. They would be made even more uncomfortable if they took the time to learn the principals and facts influencing gun advocates.

On Saturday, February 13, 2010 I had a post, “Tilting Windmills” about trying to reach out to an old acquaintance who is anti gun. My goal was to get her to go shooting with me. She did, and it didn’t make a dent. GREYBEARD was right; a waste to time. Still, I am making a real effort to disagree without being disagreeable and talk to people who hold different points of view.

There is one group where I won’t waste time. They think they hold the moral high ground but will, out of a sense of nobles oblige, politely listen to my silly little point of view.

Oh well, I’ve never claimed to be wrapped tight and may just “Bitch Slap” the next one who uses “Common Sense”. Just saying, you know?
Posted by Well Seasoned Fool at 7:07 PM 1 comment: 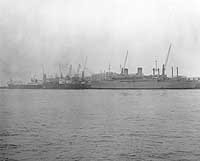 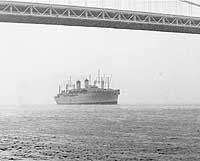 My reply was along the lines of TRADITION; all militaries from time immortal; welcome to the brotherhood of arms. Perhaps he is correct. This Army has powerful computers not available in the past.

My late father returned from WWII duty in India on a Liberty ship via Cape Hope. The trip took fifty eight days. At some point in the journey the bow started splitting. The ship sailed the rest of the way stern first. The trip was much longer than anticipated and they started running out of food. While they didn’t starve, they were hungry. Now that is a SNAFU!

My more modest SNAFU was aboard the General Rose.(Pictured) Our nine day trip took fourteen days. The powers that were never bothered to tell us lowly enlisted swine why. Perhaps it was the North Atlantic in January. The food never stopped but our smuggled alcohol supply proved inadequate. If I wanted to feel bad about my status, the 200 or so airman aboard provide endless entertainment. A most unhappy group who thought a troop ship was beneath them. Of course, we tried to cheer their spirits.

Youngest son will survive, bitching and complaining like the millions before him. Seriously, I feel his pain. It is like being stuck in a long line of traffic, behind the slowest common idiot, with no hope to escape.
Posted by Well Seasoned Fool at 5:00 PM 4 comments: 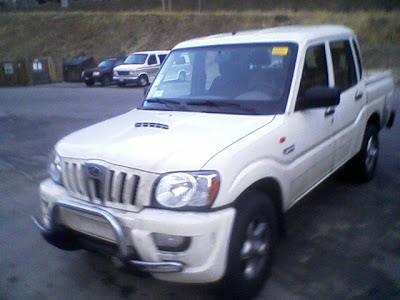 India's newest export to the USA, the Mahindra Truck. Spotted this today undergoing high altitude emissions testing (not by my employer). Diesel powered. UGLY!!!! Priced right, good warranty, will be a good seller.

Mahindra got their start after WWII reworking military surplus vehicles. They became a licensee for Willys and made Jeeps. For may years they have exported their line of small agricultural tractors to the USA.

First effort to put an album on this blog using Photobucket. Put these together to share with Milepost154. Hope you enjoy them. I will take them down in a few days.

I most definitely am not a professional photographer. With digital knowing a few framing techniques helps but the electronics take care of the work. I take snaps for my own pleasure. If others enjoy them then that is a bonus.

You may be able to click on a picture and be taken to Photobucket where you can see the album. You can also send an email address and I will send it to you as a PDF file.
Posted by Well Seasoned Fool at 7:49 PM No comments:

“No company ever got in trouble by paying sales people high commissions,” was the opening statement by Don Chalmers kicking off a four day car sale in 1986. Don Chalmers is a very successful and wealthy car dealer who made, not inherited, his wealth. It was my good fortune to work in his organization for a few years.

Good pay draws good people who strive to do a good job. In 1970, on a tour of the Mercury Outboard factory in Fond du Lac, WI, we were cautioned not to drop any litter on the factory floor or in any way make any kind of a mess. We were told the workers were proud of their place of employment and would react poorly to any activity that cheapened their workplace. This was a union shop. Mercury had the ability to track every warranty claim to the individual or team that caused the problem and dock their pay. That person had a bigger problem waiting for them in the parking lot after shift. To this day, no company, anywhere in the world, makes a significantly better or more reliable outboard motor.

The biggest on going threat to the economy of this country is bean counters. In the automobile industry, Chrysler is a poster child. Great designs, great styling, great ergonomics in a cheaply built money pit, year after year. Think I am wrong? As any used car manager what trade in brands cost the most to get front line ready.

In Business 101, you learn about the Law of Effect; that workers will intuitively determine what management really wants no matter what management says. It is simple. Provide a clean, safe job environment. Treat the worker with respect. Pay them a living wage. Keep the playing field level. Your talk means s%^t, your walk means everything. A lot of people became well off working for Don Chalmers. He got very wealthy. Think he might know a thing or two?

Jimmy Carter was a lousy president but he did have the guts to push deregulation openly. George W. Bush did it underhand by not staffing or funding the agencies assigned to “police” commerce and banking. The scoundrels ran amok. The public, rightfully, has lost trust in government. Now we have a Chicago politician running the show. Do you think the City of Chicago, or for that matter, the State of Illinois, is our nation’s finest example?

This country has many problems but the biggest is the economy. One modest proposals to reward long term success and punish short term “success”. Tax speculation high and productivity low. Focus on making a bigger pie and less on how to divide the shrinking pie.

We are blessed with a hard working and productive population. If we can get the economy rolling again, we can afford the Obamas and assorted ilk and still make a go of it despite their drain on all of us.
Posted by Well Seasoned Fool at 6:43 PM 3 comments: