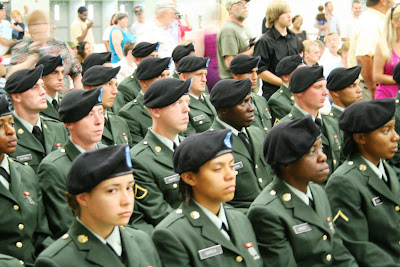 Youngest son passed basic and is now in Texas to be trained as a medic.
The ceremony was impressive; scripted and executed to perfection. What a difference from my experience at the same post 46 years ago!

Turns out I needed a hankie. I noticed several grey heads with a similar problem. Towards the end of the ceremony their company commander had them repeat their oath.
Everyone in uniform I saw was repeating it at the same time.

I was shocked by a statistic in the CSGT MAJ's speech. He said less than 1/2 of 1% of our citizens serve in the military.

Everyone in my son's platoon made it and their DI was named the outstanding DI for the cycle.

I need some time to mull over this experience and the paths my thoughts are taking. Perhaps a few posts will result.
Posted by Well Seasoned Fool at 8:11 PM 2 comments:

Youngest son finishes Army Basic next week. In the morning will leave to pickup his wife and four children so we all can be there. Will be away from this blog for a week. His motivation for joining was economic; no steady work for a Master Plumber.
He, along with several second and third cousins, is the eighth generation of our clan to serve.

Being FORCED to spend several days with the world's cutest grandchildren is part of the deal.

In other family news, oldest son is off the patch and is now three months smoke free.

Will post again and answer comments when I return.
Posted by Well Seasoned Fool at 9:17 AM 3 comments:

Recent crime news from the Peoples Republic of Boulder involves a robbery of a Medical Marijuana Facility. In Granola ville, where the normal vehicle is a Subaru or twenty year old Land Cruiser, these master criminals used a Black Escalade. Other than the Oscar Meyer Wienermobile you would be hard pressed to find a more conspicuous vehicle.

Probably a fun break in routine for the Boulder P.D.
Posted by Well Seasoned Fool at 8:49 AM 2 comments:

Skimming the "Progressive" sites today, about 3 to 4 out of ten posts are Obama negative. Is it possible he can unite the left and right in a common distaste for him?
Posted by Well Seasoned Fool at 9:00 AM 1 comment:

Another flying story has been requested. At the start of my short lived aviation career, I worked for a madman who bought airplanes sight unseen. After he bought one, someone would be sent to fetch it; in this case, me. One fine day I was dropped off in Lexington, TN to pick up an Ercoupe and return to Colorado.

The Ercoupe is a simple two place fixed gear low wing aircraft with a bubble canopy cockpit and twin tails. Looks like a mosquito. Entry is made via the bubble. Two panels slide down and you can fly it that way. They have interconnected controls and are stall and spin proof. You maneuver on the ground with the yoke much like driving a car. I find them fun to fly.

The Ercoupe I found was in poor condition and "out of license". A local A&P (mechanic) signed it off for a ferry flight and away we go. The Ercoupe has three fuel tanks, in each wing and behind the engine. The lines are inside the cockpit and the rubber hose for the left tank ruptured. Ten gallons of gasoline was now soaking my left leg. What you might call a potentially explosive situation. First, I slid down the canopy windows. Then, very gently, I started a shallow climb. This allowed the fuel to run to the tail where small holes are built in to drain condensation. The master electrical switch, conveniently located on the bulkhead behind the pilots head, I left alone and the radio I didn't touch. After an hour I started to think about landing. Paducah, KT, seemed to make sense.

Per my sectional map, the airport was five miles West of downtown Paducah. Picking up a sectional line, I flew the appropriate amount of time to cover five miles. No airport. The fine compass in the Ercoupe showed me flying Northwest. This compass was an automobile accessory compass with a price tag that said, "Gamble 39 cents".
After several tries, I figured out the railroad tracks from the map to the ground and followed one until, the airport! On the ground, I learned Paducah is one of the few places sectional lines don't run East/West.

With repairs made and clean pants, off we go until we hit Interstate 70. Hard to get lost following an Interstate. On a warm day, the average VFR pilot will climb to smooth air, usually about 2,000' above the ground. Keeping the Interstate off the left wing, you have an easy and smooth flight. Exactly where most General Aviation aircraft can be found, outside of Kansas City, an aerial intersection called Bonner Springs is located. This intersection is where large jet airliners are maneuvered for approaches to Kansas City airports. If one deliberately set out to create a perfect place for mid air collisions, this is the place. Here I am droning along in the haze when I see the nose of a TWA 727. I'm close enough to tell the captain isn't wearing a hat and the copilot is. People will tell you you can't snap roll an Ercoupe. Maybe so, but I did that day.

When I got the cursed Ercoupe to Colorado, the only instruments working were the oil pressure and altimeter. Did I mention the brakes stopped working? Fun, fun, fun.

Note to Dirty Al. The story you want to see won't happen. Statute of Limitations doesn't apply.
Posted by Well Seasoned Fool at 8:17 AM 1 comment:

Yeah, I Can Hit a Target

Recently had work done on my .380. Today, it got tested. The results won't impress any competitive shooter. My criteria is to hit a target at "parking lot" range. So, standing two hand modified Weaver and Macular Degeneration; think a TA might take his business elsewhere?

Again, I am reminded why I prefer revolvers to automatics. At some point the .380 will get traded. What will work is a Charter Arms in .22 for practice and the .44 Bulldog for carry. If five shots won't get the job done, the situation may be more than my skills can handle.
Posted by Well Seasoned Fool at 3:09 PM 2 comments:

Get Rich by Running for Office???

Can a candidate get rich siphoning campaign contributions and stashing them somewhere? Who knows?

Let us consider candidate Obama, a Chicago politician with no money but smart and a hustler. He hustled his way into a prestigious high school, then a minor league college, then other, more prestigious institutions of higher learning, all on scholarships, grants, etc. He hustle himself into politics and learns how to raise ever increasing, nay staggering, sums of money. Along the way he is elected twice but doesn't seem to care about the offices themselves.

He then hustles himself onto the national stage and, oops, gets elected to the highest office in the land. He hasn't prepared for the job; doesn't grasp the nuances involved and is proceeding to produce one cluster ____ after another. If we, as a nation, survive his four years, we can hope he will devote himself to hustling his Presidential Library.

That is a change I can believe in.
Posted by Well Seasoned Fool at 7:39 PM 1 comment:

As requested, another car lot story. Most salespeople work on straight commission, leading to bitter arguments as to who earned what. A customer on the lot is an "UP". A salesperson, not making progress, cannot "Lot Drop" the UP; they must see their manager. The manager decides if another salesperson should talk to the UP. This is a "turn". If the second salesperson is successful, the commission is shared.

Maggot was a poster child for bad salesmen. He found few chemicals he didn't enjoy abusing. He was a major gambler, always in debt to lenders with collection methods not acceptable to the BBB. His ethics were those of a starving piranha. Worse, he was a mediocre salesman and got fired two to three times a year. This life style led to chronic high stress.

One day while showing a car on the showroom floor, a blood vessel in his brain ruptured. Lots of drama, ambulances, etc. Another salesman took control of the customers and was able to complete the sale. Three days later Maggot was taken off life support and died.

The question here is, should Maggot be on the deal? NO, he didn't make a proper turn, he committed the ultimate "Lot Drop", and he no longer works there.

Free advice. If you are not hardcore to the bone, don't try to sell cars.
Posted by Well Seasoned Fool at 12:52 PM 1 comment:

Back in the day, Dirty Al, always a leader in tech stuff, urged me to get a computer. I hated computers and only learned enough to work car deals and pull credit reports. I wouldn't even discuss cell phones.

This morning I set up my first desk top. This replaces one of my two laptops that has screen failure. In the house, not including the cell phone, there are three digital cameras, a drawer full of dead cell phones and a GPS in the car. Of course, I have mastered none and still hate reading instructions. Thanks to help from Mo and Jan, and checks written to SC'sPC's, they all work after a fashion.

So to Dirty Al, laugh you damn hyena!
Posted by Well Seasoned Fool at 10:07 AM 3 comments: