Retirement? When Does That Happen?

Once laughed at the pictures of Guard members with their signs, “One Weekend A Month, My Ass” on their vehicles in Iraq.

Need something like that for my “part time" job. Just back yesterday from one trip and going out on another Monday. No blogs next week. My laptops are in the hands of my middle son.

Dropped off the ballot today. Impressive line of early voters. Two Election Judges on duty, one from each major party, and they have been busy all day.
Posted by Well Seasoned Fool at 8:49 PM 1 comment:

Colorado has a system whereby the voters decide, "Shall Judge ________ be retained in office? Yes No.

In 1988, the Legislature created a commission to rate judges. As part of my effort to be an informed voter, I visited their web site.

Of all the judges in Colorado, they recommended retaining all but ONE!

Reading between the lines on each Judge's evaluation, I found reasons not to retain five out of nineteen that were on my ballot. With better information, the No vote total would be higher. As tempting as it is, voting No on all of them is irresponsible. Good people need to be recognized.
Posted by Well Seasoned Fool at 8:41 AM 2 comments:

I get calls from folks I worked with before retirement. Recently, one called asking to use me as a reference on her resume. We had a long conversation about the usual, who is where doing what, etc. We then got into an analysis of the operation of a small used car lot she managed under my supervision. Seems she still has issues with my way of doing things. I had to ask her why, after my retirement, her lot closed within six months. The lot produced a profit under my direction.

Small business operators have a tool, mostly ignored, that can help focus on what matters. This is “Cost per Minute”.

In the mid 1990’s, my employer had me organize and manage off premise car sales. We held sixty over a thirty month span. The cost? $32 per minute. Our dealerships were run in a most frugal, if not downright cheap, manner. No frills. Our operating costs were around $122 per minute.

Generating income per minute became a focus. Every problem can be overcome but time gone cannot be recovered.

Employees respond well, if grudgingly, to clear goals and practices. The ten minute gab fest around the coffee pot isn’t very enjoyable when you are focused on the cost per minute and revenue per minute. You want your program to work? Walk the walk and keep you pie hole shut. Find some other way to feed your ego. Your employees may have to listen to you in order to keep their paychecks. They can choose, if they so desire, to subtly sabotage your program. You really have only the power to fire. Don’t worry about being liked. Worry about being competent. Your employees want to know you have what it takes to keep the business going and keeping their jobs safe.
Focus on what is crucial, ignore the touchy-feely, and be successful.
Posted by Well Seasoned Fool at 10:17 AM 4 comments: 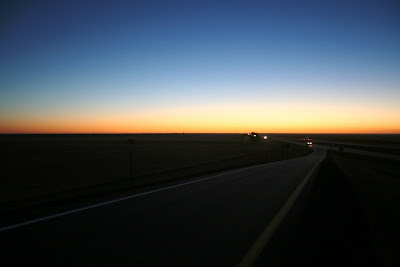 Small town Kansas has many fine churches. This one is in Walker, about twelve miles East of Hays and just off Interstate 70.

Once this was a thriving town, able to support a parochial school. Imagine the effort, dedication, and pride that went into making all this happen. Now the people are gone because the jobs are gone.

The state of USA agriculture, and the social impact changes have brought, has been analyzed by much more qualified people than me. We had waves of immigrants that came here for a better life. That life started with a JOB.

Today, the jobs can be moved to the people, and not in the USA. What happened to Walker, KS, is happening to this country as a whole. While taking the photos, a resident came over and talked to me. Nice man, and hungry for something novel, if only a stray tourist. Bad teeth, high starch consumption complexion, submissive body language, and wearing his Wal Mart work shirt. We talked for several minutes and I learned he is a fourth generation resident. I doubt his present is the future his forefathers wanted for him.

Recently, the GPS in my vehicle rerouted me through parts of Birmingham, AL. Block after block of burned out houses. Sullen, defeated people walking the sidewalks. Nothing cheerful in sight. What a challenge to make a life and raise children in that environment.

Wealth gainfully earned I respect. Our government should not hinder those activities that make it possible. Unfortunately, greed and power follows, allowing the haves to exercise dominion over the have nots and exclude new players. We need referees, keeping the playing field level. That is the function of government. That is why we need the 2nd Amendment; so we wage slaves don’t become literal slaves. Google “Ludlow Massacre”.

So, how to create change? Get involved, at the local level, in politics. Talk to people who don’t agree with you. Try to find some common ground. Don’t be a passive victim; raise hell. It is something like contact sports. You will get bruised but they will know you were there and probably will avoid provoking you. Give thanks for what you have and thank those who do good to/for you. As an example, at a state highway rest stop, the worker cleaning the place was in the lobby. I went up to him and thanked him; that it was great to have a clean place to use. My thanks was sincere. If the place was filthy, I would have no problem finding out who supervises the facility, contacting them, and making my feelings known. It just takes a little effort.

I read a lot of conservative blogs. I also read leftist blogs. Each has one common detonator and that is nasty name calling. No respect for the oppositions viewpoint and personal disrespect freely given. If problems are going to be solved, we need to get back to being a civil society. Now it is who has power to ram it down the other throat. We are all in the same boat. If we can’t find ways to row in the same direction, we may all end up swimming.
Posted by Well Seasoned Fool at 11:11 AM 3 comments:

The Voices Speak to Me

Back home from a round trip to Alabama. The vehicle involved has upgraded GPS with traffic and weather alerts among other bells and whistles. Part of the job is using, evaluating, and reporting on everything in the vehicle.

Going through Birmingham the system alerted me to traffic congestion and suggested a detour. OK, I will play. An interesting experience. South of Birmingham was a fuel stop. A vehicle I recognized as being in the pack North of Birmingham pulled in as I was leaving. Time savings of about twenty minutes.

Northbound through Nashville the system took me off the Interstate. Past Nashville I caught up with a delivery truck I had followed into Nashville so no time savings there.

The system put me on the old, pre Interstate, main roads. Two negatives. One, long traffic lights. Two, neighborhoods that I wouldn’t want to wait in for AAA with a flat or breakdown. The upside is not being “trapped” on the limited access Interstate.

More information, properly utilized, is almost always a good thing. Would I pay extra for the system in my personal vehicle? Probably not. My five year old GPS serves me well although I’m irritated every time I pay more for the updates than the cost of a new unit. Thanks, Magellan. Won’t catch me next time.
Posted by Well Seasoned Fool at 2:20 PM No comments: 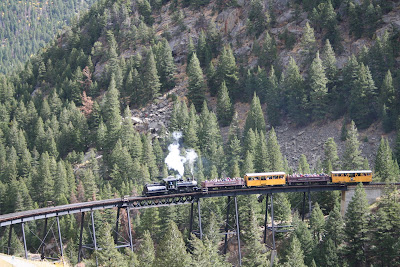 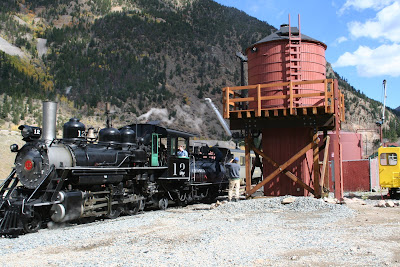 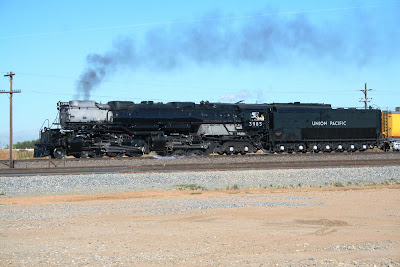 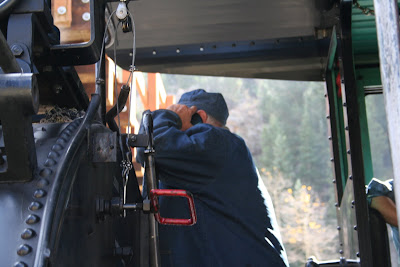 As a kid living along side the old D&RG mainline, I never tired of seeing steam locomotives. Even got to ride in the cab of one.

Last month the Union Pacific pulled the Circus train with a Challenger and I was there. Yesterday, visited the Georgetown Loop Railroad.

Interesting contrast of steam engine and the engineer on a cell phone.

No blogs for about a week as my "part time" job is sending me on an assignment.
Posted by Well Seasoned Fool at 9:11 AM 2 comments:

Old NFO, http://oldnfo.blogspot.com/, has a wonderful post, “Welcome Home.” Worth the visit and nothing I can improve upon.

A father/son pair I know are THE GREATEST PATRIOTS. Think Ronald Reagan was nearly a demigod. Strong conservatives; just ask them. Neither has come within a mile of a recruiting station. The father has all kinds of excuses for skipping the draft. He has made certain his sons didn’t serve but, they applaud those who do.

One Veterans Day the son said to me, “Thank you for your service.” The first person to ever say that to me in the forty plus years since serving in the Army and it comes from a hypocritical puke! Wanted to punch him. Instead I said, “Your Welcome,” and walked away.

I respect anyone who raised their right hand, took the oath, and fulfilled it. Whether they were on the tip of the spear or a cook at a stateside training post, they have my respect and heartfelt thanks.

A lot has been said about the treatment of the Vietnam veterans. Fair enough, it needed examined. The vets who really got the backhand of their country were from the Korean conflict.

We seem to be doing better as a country in our treatment of our service members. Hopefully, my son now in Afghanistan will find his fellow citizens more appreciative of his service in the years ahead.

As to those who could have served and weaseled out, they will never have my respect. Probably won’t matter to them but it matters to me.
Posted by Well Seasoned Fool at 5:36 PM 3 comments:

Some acquaintances call me Mr. Maytag; always agitating. Today's Delta Flight was only 40% full so I started making an issue about wanting a Pepsi, not Coke. The Atlanta based crew were not amused. There was some talk of placing me in the smoking section (out on the wing) and vague threats about what would transpire once we landed. Sheesh. The coffee they served was good. I rarely drink sodas. I often, in the words of Beat and Release, http://beatandrelease.blogspot.com/ poke people with a stick.
Posted by Well Seasoned Fool at 6:04 PM 3 comments:

Youngest son is currently without Internet. We may see some postings when he gets access. He is able to call home (Skype). As of this morning he was fine, per wife, and, good news to this father, in the rear with the gear.
Posted by Well Seasoned Fool at 4:01 PM 1 comment: