With my youngest child soon to be deployed to Afghanistan, my interest in what is unfolding there is intense. My son is well aware of operational security, and says little, which I respect.

Wars now don’t seem to be won the way WWI and WWII ended; with nations surrendering to other nations. Vietnam was, in part, to stop the expansion of communism. If that was the principal reason, an argument can be made that we did, in fact, win.

If our goal in Afghanistan is to deny a secure base, sanctuary, and shelter to the jihads, do we need the whole counter insurgency strategy? A secondary goal may be disrupting the international drug trade and denying the profits to our enemies. Can we achieve these goals without the whole nation building effort?

My late father served in the CBI Theater in WWII. He had a rare talent for learning languages. He spoke four or five dialects of Hindu, Spanish, and Navajo, all learned while being a foreman. He was no racist in his day to day dealings with the people who worked for him. He firmly believed the two things Asians understood was a boot on their neck and rice in their bellies. When those two things were consistent, harmony prevailed.

The way in which Asian people govern themselves, worship, do business and, in general, conduct themselves shouldn't’t concern us unless and until their activities become a threat to us.

I hear all the arguments, all the theories, all the justifications. What is so striking, to me, is the proponents are rarely, themselves, the ones who will go into harms way.

My position? Remove the threat and get the hell out.
Posted by Well Seasoned Fool at 8:45 PM 3 comments:

http://www.elections.colorado.gov/Default.aspx?PageMenuID=1400
Posted by Well Seasoned Fool at 4:24 PM No comments:

The midterm elections are coming. The Democrats are desperate. Election Fraud is a distinct possibility. Become an Election Judge. The link is for Colorado but the requirements are fairly uniform across the country.

The commitment is one short training day and one LONG working day. It is a way for an average citizen to have an impact. 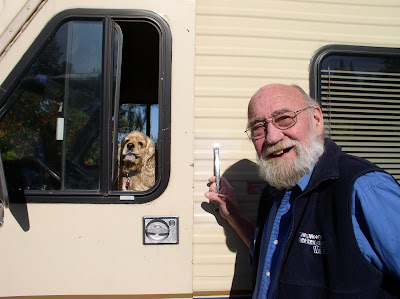 Dirty Al, former Blanket Head, Charter Boat Captain, bail bondsman, repossession agent, and the best car salesman I’ve ever known, has been having some hard years. Major health problems, family problems, financial problems, friends dying and an ugly and unfounded accusation in a local unsolved crime have taken their toll. During it all, he has remained upbeat and has never quit. He is also cheap. I’ve accused him of still having his third grade lunch money.

This is a lame post. So much of the news and HOPEANDCHANGE is depressing, I need to find something upbeat and humorous. I’m so happy for Dirty Al. We go back a long ways and have always had each other’s backs.

Been on the road. On Delta from ATL today. Asked for a Pepsi. Didn't get it.

Waste and Stupidity; Government Style (But I Repeat Myself) 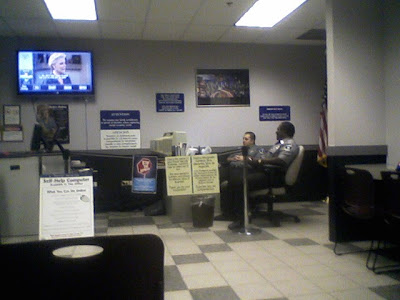 Went to the Aurora, CO, Social Security Office this morning. Pleasant experience as these things go; in and out in forty minutes with task accomplished. While waiting, noticed these two hard working individuals.

Folks, every service window in this place is made of 6" clear plastic. All doors are hardened to bank standards. The building is ten blocks from a police station. Why are two armed guards needed? What is the cost? Is this standard in every Social Security office in the country?

If an armed presence is needed in these offices, why not draw from the existing staff? Extra pay, a good training program, and ARMED! Should save a lot of money.

I'm no security expert. Just as a mental exercise I formulated an assault plan. First, take out the two guards pinned in a corner sitting on their asses. Next, using a ladder brought for the purpose, lift out one of the ceiling panels and drop over the "armoured" wall.

Consider the two guards. Want to put me in hell? Make me do that kind of "work". At some level, they must understand how useless and unneeded they are.
Posted by Well Seasoned Fool at 5:30 PM 3 comments:

Hey Barack, Get a Clue

You are the most unprepared President since Carter. You have surrounded yourself with the intellectual elite who are masters of budget meetings and academic turf battles. Solving real life, complex problems; not so much so.

Call on our ex-Presidents for advice. Do it privately so public confidence isn't further damaged. Put aside your ego and LISTEN to them. It will shorten your on the job training time. Personally, I don't think much of any of them but they have been there, done that.

Or, resign. Even that idiot Biden is better prepared.
Posted by Well Seasoned Fool at 12:13 PM 5 comments: