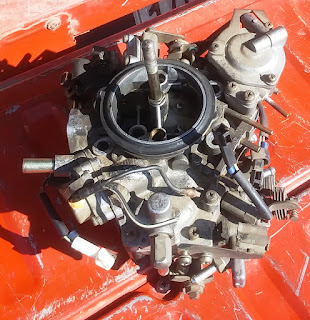 Paid a professional mechanic to remove the carburetor on my 1986 Mitsubishi Might Max. 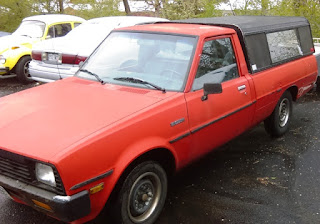 I'm literally losing my touch. Years past this job was within my skill set. Dropping things and less sensitivity means I could (would) create more problems. Best to suck it up and pay for expertise.

For the same reasons, the carb is off to a rebuild specialist.

Upon return I will probably use the same mechanic to install it.

The truck won't pass emissions. Years of ethanol added gasoline has finally eaten the rubber guts. I can scofflaw register it at a country address outside the emissions area and save the expense. Penny wise and pound foolish, IMO. Leaves me open to the "authorities", which, given my big mouth, is always a consideration.

Our extended family has a private cemetery on an old family homestead in Northwest (Moffat County) Colorado. My sister expects me to precede her in death, and plans to bury me in "Maxine".

This is my third Mighty Max, and my sister has named each of them with a name starting with "M".
Posted by Well Seasoned Fool at 2:07 PM

I'm right there with you. I have a 2001 Silverado with 160K miles that still runs like a champ. I bought it new. It's time to replace the serpentine belt. I could do it if I had to, but I don't, so I'm going to pay to have it done. Some parts (of me) don't bend like they used to.

RHT447
When I did a routine timing belt service on the Mitsu, I hired a kid off Craigslist and stood there and showed him how to do it.

Don't know Chevy, but a serpentine isn't too drastic. Maybe remove a coolant tank or washer reservoir. Most mechanics I know like to replace the idler/tensioner pulley at the same time.

It's totally unreachable from the top (you can't even see it), and I could *maybe* reach it from the bottom if I picked up that corner of the car 6" or so.

The pictures make it look easy, and it would be, *IF* it were up on a lift. Then I could just walk up to it and swap it out.

But after crawling around with my Mechanic's Pad under me, and moving it and the light repeatedly to finally be able to see it....man, I'm just not that "limber" anymore to actually get at it.

drjim
I feel for you.

I restrict my mechanical efforts to cars manufactured prior to 1940. Everything is easy to get to, and there's not much more to them than an average lawn mower.

In my mispent youth, I used to change my own oil and do my own tune ups. Nowadays, cars don't need what we used to call a tune up. And changing the oil at Jiffy Lube is cheaper than buying 5 quarts of oil and a filter at WalMart. In any event, I can't even see the spark plugs on my 2018 Dodge Ram 2500 - much less change them out.

But I know every nut, bolt and screw on a Model A or T Ford, and how to replace every part on those cars, and yet I don't even change my own oil on my Dodge Ram. You can't even air up the tires yourself anymore - they take nitrogen.

Fredd
As my Dad often said, "Poor people have poor ways". I liked to say, "My mechanic skills are poor, but my hourly rate can't be beat". Not too long ago, I changed the thermostat in my sister's F-150 so she could leave for Reno. Ten minute job took me 90 minutes.

My mother-in-law tells everybody she knows that I can fix anything.

Well, she's partly right: when I see 5th-grade drop-outs making a living at the trades (plumbing, electric, construction, masonry, etc.), as a holder of an advanced degree or two, I always know that if those dumbshits can do it, so can I.

And then I started doing it all. Now, at the advanced age of 64.5, I pick and choose what I want to fix. If it involves climbing a ladder, no way, not anymore. If it involves a set of instructions, I'm you're guy. And if I don't like you, I'm not going to work on your shit.

I guess I have turned into a full fledged, dues paying jerk in my old age.

If it is mechanical I can probably puzzle out a solution. If it is electronic I'm fucked.

Are you sure you waited until advanced years to become a jerk? Maybe a long apprenticeship?

I was actually a nice guy into my 30's. Then I got recruited into the Brotherhood of Jerkdom by a credentialed jerk who once told me over a beer something I never forgot (he was a retired LAPD police officer):

"Fredd, most people assume that others on balance are good folk. Not so, Fredd. Other people, when given the chance to advance their position to the detriment of your position, nearly always will take it. You have to watch with a jaundiced eye the behavior of everybody, to include your own mother."

This credentialed jerk is right, sadly. But that's how people are - back stabbing SOB's when given half the chance. Word to the wise: don't give them that half a chance.

And your friend was right.