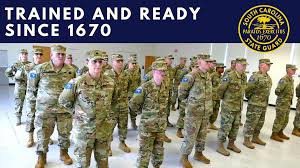 My grandson Connor is about halfway through Basic at Fort Jackson, SC.  I sent him a big bag of M&Ms. Seems those are regarded as “contraband” and brought scrutiny from his Drill Instructors. My bad! The contraband goes into a “personal” bag until he graduates. He tells me he is looking forward to eating them.

AIT will be training as a mechanic on Armored Equipment which will lead to being a diesel mechanic as a civilian plus the Guard will help with his college.

He graduates Basic April 29th. At the moment Fort Jackson is closed due to Kong Flu. Hope that changes; I want to be there as I was for his father.

He becomes a fifth generation soldier.

Connor is a good man. His father would be proud.

At least you didn't send him a jelly donut....

OldNFO
He is a good kid.

Proud on any young man that takes the oath. Especially when it comes from a loyal and parotic family. BZ all aroung.

My hopes for the survival of our country remain ONLY because of men like Connor.
A very small percentage or our parents still know how to raise honorable kids.
Kudos, WSF.
Tell him we're all proud of him.

GB
Thank you. His father would be proud.