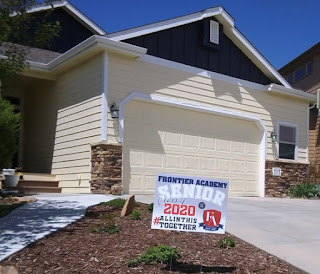 Imagine the war stories the children born to the Class of 2020 will endure.
Posted by Well Seasoned Fool at 7:43 PM

Yep. Some of the seniors I went to high-school with got an all-expense paid trip to Viet Nam.....and a couple of them never came home.

DrJim
I graduated in 1961 and ended up doing a 50 day TDY to Pleikou building fence in 1966. Saw maybe 4 Vietnamese but lots of pissed of Macaguas. Flew us in from Germany and then back. Several younger cousins served there. None killed, but a couple of Purple Hearts. One kid from Steamboat Springs was killed there. An Air Force pilot from Steamboat was a long term POW. Older than me; I didn't know him.

Luck of the draw? Many from my age group+- served in Germany

The present generation is very different from ours.

As different as we were from our parents. And not just .05/gal milk and .15/gal gasoline. Yeah, we had Viet Nam, but not WWII and full mobilization. Or the Great Depression. Or the Dust Bowl, or any number of significant events.

We had two Kennedy's being murdered, Dr. King being murdered, the Space Program, the Civil Rights movement, the riots in the late 60's, Jimmuh Cahtuh, Slick Willie, and now this overblown, media-hyped, power grab "pandemic".

And the Earth continues to rotate and orbit the Sun.

Today's kids will be the ones who tell their own children "In 2020, we didn't have toilet paper, we had to drag our asses on the grass. Uphill. Both ways. In a snowstorm."
(swiped from FB)

LL
I'm sure you see it in your children and grandchildren.

DrJim
The level of information/disinformation on all subjects is a factor we didn't have, and our parents most certainly didn't have.

Anyone remember the John Birch Society printed tracts being passed hand to hand?

I remember the Birchers well. I even had one of their "Little Blue Books" down in the library.

DrJim
I read most of their stuff but I couldn't swallow some of it.

Yeah, some of it is pretty Out There!

To be fair, my Millennial eldest's in the game. Right now I'm praying we don't go to war with China. He ships out to S Korea at the end of June.

But yes, a far cry in general from the Great Generation and all of that.

LSP
Had a Millennial talking about how the Baby Boomers rigged the economy for their benefit, and how follow on generations will inherit the debt. She made some good points.

I hope your son stays safe. The decision to take the warriors path is not to be taken lightly. My son knew the risks and didn't bemoan his fate.

My late father was adamant that we should never get into a ground war in Asia. I've seen nothing in my lifetime to prove him wrong.