Banner, the not so brave dog.

In his seven years, he has lived in apartments and suburban homes with a fenced yard. He is very timid about many things and I’ve been working on changing that. For instance, he is skittish about different floors including my deck. As you can see, he has decided the deck is OK. 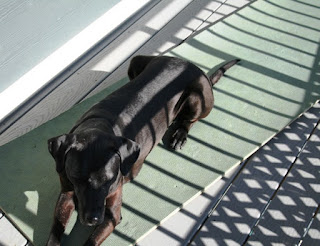 Wide open spaces scared him. As you will see in some of the pictures he has overcome that fear. At the water tank, he didn’t know how to drink. I got his water bowl from the truck, filled it, and then he drank. He is a lab, but I haven’t taken him swimming. That is on tap for this summer.

There is a trail to the buttes that I have hiked in the past. This time of year you can’t get on the Buttes as it is the beginning of nesting season for many species of birds that make their home in and around the buttes. 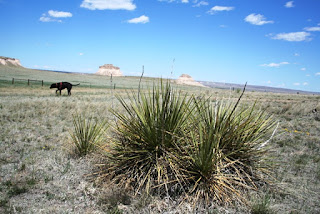 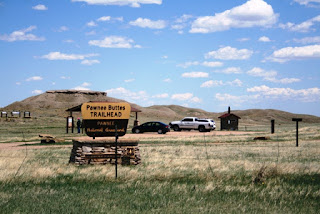 It is a nice place to come for a picnic. In the roads leading into the visitor center, many turnouts are used by campers/RVs.
Future Energy 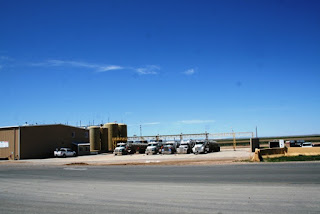 The area is blighted by hundreds of wind turbines with more being built all the time. When, in twenty years or so, they are rusted and abandoned, the electric grid may still be useful. The picture is a place where water, separated from oil, is pumped deep underground. Logically, if it is pumped into the ground it can be pumped back.

Water source, abundant sunlight, and an existing power grid. Just might save our asses.

We just have to get out there and see it. It's places like that where the term "Big Sky" came from!

Once he gets over the fear, it'll be hell to play getting him BACK to you.

JL
Him not swimming might be a good thing. Wet dog/car ride?
DrJim
Sent you an email.

OldNFO
One I get in my vehicle he comes running. Maybe he is afraid of being left behind.

Dam, those turbines. What a nightmare, but I like your dystopian prophecy of rusted hulks falling returning to the grass and soil. In the meanwhile, what a destroyer and yet again, another example of the maxim -- everything the libs roll out produces the exact opposite of its stated effect.