Water Everywhere but None to Drink 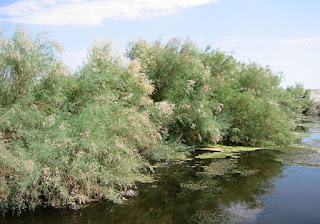 HOLIDAY UPDATE: "Unquestionably, there is less water in the river now, but why?" #copolitics https://pagetwo.completecolorado.com/2020/05/25/walcher-colorado-river-water-dropping-but-its-not-climate-change/

Tamarisk, an invasive non native plant, is part of the cause, and one that can be eliminated. It just takes money, and the willingness to do so.

As we end the Chinese flu debacle, we probably will face massive unemployment. Imagine, if you will, a modern version of the Depression era Civil Conservation Corps.

Two states that would benefit the most are Nevada and California. Arizona would get some benefit. Mexico (Baja) might get some of the water promised by treaty but never received.

I had uncles that were in the CCC. They said when they went into the military in WWII the CCC experience was helpful.

The CCC would be a good idea today no matter what. There are useful projects that could be undertaken all over the country for "public good". Cleaning the invasive species from the Colorado would be one, for sure. But there are a lot. Obama spent $800 billion on "shovel ready jobs" but it all ended up as graft. I think that there were something like 200 part time jobs created. What a waste. I suspect that an infrastructure movement under President Trump might include a modern version of the CCC.

LL
President Trump is a practical man and not a graft machine. I have high hopes for a 2nd term.

OldNFO
I know, someone should bitch slap me.