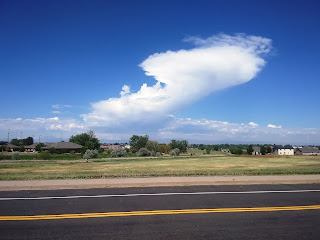 Why Front Range pilots in smaller planes depart westbound over the Continental Divide at 0600.

Learned the same thing back in Illinois when I used to fly.

And if by chance you enter a thunderstorm, TURN AROUND!

DrJim
Likewise encountering a mountain wave. Further, on the Continental Divide, there are passes that should be flown eastbound, and ones flown westbound, unless your plane can climb to FL20.

I'm sure the guys out of the Owl Canyon Gliderport are quite familiar with the mountain waves out here.

DrJim
1968 I worked a weekend gig near Co Springs towing gliders. Last tow of the day, caught a good updraft, went to idle power, and fooled around for 30 minutes. Lots of pilots earn their diamonds out of the Black Forest Gliderport.

Well that was uplifting. Speaking of which, hope the fishing license results in lots of fish!

LSP
An uplifting updraft is often followed by bottom dropping downdraft. Once, over Corona Pass eastbound in a C-180, at idle power, 40 degrees flaps, and 70 mph indicate, went from 11,000 to 18,000 very quickly. A few miles further on, same airspeed, no flaps, and 75% power we were descending at 3,000' per minute. Being a High Mountain lad, I could take 18,000' for a few minutes without hypocia setting in.

Tomorrow I'll stop by the storage shed and dig out the fishing stuff.

OldNFO
Worse for the passenger, a lady with a broken leg strapped onto a stretcher.