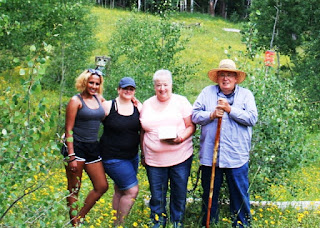 On my sidebar is Lessons From My Exes. This is my great niece who is as decent and hard working woman as you will ever meet.

She has earned most of her college education playing soccer, and her body has paid the price.

She has put up a post I believe we all can learn from.
Posted by Well Seasoned Fool at 8:04 PM

I read that. Disturbing. Maybe you should shoot him. No, Don't! Half kidding.

LSP
Father and son did the deed. Both are police officers, in Georgia.

LL
I'd hoped as a country we have moved on from this kind of shit. Wrong again.

My Mother taught me in such a way that "alarm bells" go off early.
The world would be a MUCH better place if all Mom's did.

She did a good job, however, more details are coming out that make one wonder what the truth actually is. He did NOT deserve to be shot, no question about that, but I wonder why he ran toward two men with guns, then tried to fight one for the gun.

OldNFO
These things are seldom crystal clear. What is clear is he didn't deserve to be shot; that the father/son instigated the confrontation. His choice of self defense may not have been the best. It may be he believed it was his only chance.

She, and many, many black people live with a fear we Caucasians rarely do. I understand some of it. As a young child I was the minority in a small town of mainly Mexicans, citizens or not I don't know, but THEY identified as Mexican. My first knife fight was at age five. He had the knife. I had a length of 2x4. He was twice my size. I still carry a scar on my left hand.

What stinks is the response of the responsible officials. The DA tried to quash the incident. Black people know this happens all the time, whites protecting whites even if the whites are wrong. Can't say I blame black citizens.

I think too we are beginning to see what happens when normal citizens begin to think our Law Enforcement personnel are not doing their jobs.
I don't live in Chicago, Baltimore, Los Angeles, Portland OR, or Washington, D.C..
And for that I give thanks to my God.

Oh I don't blame them either, but I'm waiting for both sides of the story to come out and see if the truth can be parsed from it. As soon as Sharpton/Jackson/et al get their hooks in, all bets are off.