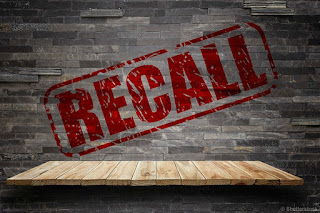 The deep blue takeover of Colorado, and the subsequent passage of over 100 bills has sparked several recall efforts.

In the House District 50 (where I live) a recall effort for our recently elected representative is underway. Maybe she, and her owners, excuse me, supporters are getting nervous. Behold  the postcard I received. 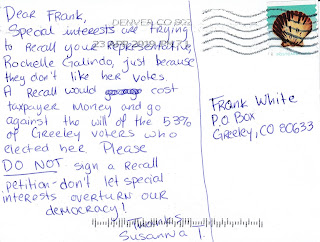 I noticed the postmark, fifty miles away from Greeley.

The other side is interesting. Part of a large printed sheet? 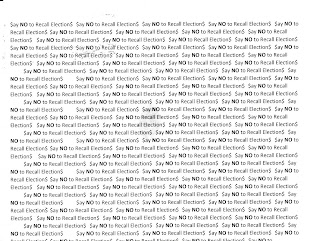 A brief summation of our ‘Blue Wave’. Our current Governor is part of “The Gang of Four” wealthy trustfunders who started dumping money into Colorado politics around 2010. They have been, damnit, successful.

Since then outside money has been pouring in. Is Colorado a blueprint for (P)regressive takeovers in other States? How about New Mexico? Is Texas next?

Proof of outside interference?

Perhaps the only real outcome will be the (P)regressive’s discomfort with all the resistance put up by the State’s deplorables. Already the (P)regressives are using distortion and outright lies when they dare to venture into rural areas and quell the uprisings.

Perhaps the root of the problem is the (P)regressives live in their own bubble, networking with other like minded people, and cannot fathom the loathing, and outright hatred, their actions cause among the deplorables. Akin to Indian Agents trying to  pacify and ‘educate’ native American tribes  circa 1850s-1930s if you will.

The day may well come where the 2nd Amendment is our savior. Hope not.

My biggest issue with (P)regressives? Their refusal to accept our government was created, in part, to protect minorities from the heavy hand of the majority. Only their view is worthy. Fuck’em!

Posted by Well Seasoned Fool at 11:52 AM

Denver/Boulder is getting pretty big for their britches, methinks.....

You're 100% correct. I totally forgot about all the Trust Fund Kiddies in those places. Guess I'm more concerned about the farmers, ranchers, and oil production people. Silly me!

As my late father once said to one who complained about smoke from a sawmill (in the days when scrap was burned), "I smell a $10,000 a month payroll".

"Recall Rochelle Galindo just because they don't like her votes!"

Well DUH. What a bunch of fucking idiots.
Tell me, oh good friend with the cutesy handwriting, what other reason should there be? If someone isn't representing me (which is, well, ALL OF THEM) then they should be recalled!

Dragged out into the street and kicked in the taco, really, but I'd settle for a recall.

But, but, she is a victim. She is a lesbian latina! Any recall effort is both racist and homophobic.

I swear I didn't know she was either lesbian or Latina when I suggested a kick in the taco... but hey, the punishment should fit the crime!!! Hahahahahaha

Conservatives all need to vote.

LL
Give the (P)regressives due credit. They get out the vote, steal the votes, stuff the ballot box, and use every dirty underhanded trick to win. Pls, with their money advantages, they can hire all the bodies they need.

Definitely follow the money... And I wonder if that is actually a written postcard, or a printed one.

Old NFO
I believe it to be printed based on the reverse side. Effective, I will give them that.

Conservatives need to vote, to stand up to the progressive clap trap, to take off the gloves. We have been quiet too long and it's costing us and our families...

Brig
Conservatives are busy working and supporting their families. (P)regressives are dilettantes, IMO

Wow, you got a handwritten something. That's new. Politics in Colorado are getting stranger an more....Californian...I might say. Can you serve eviction notices? Just a thought.

Momma
See my remark to Old NFO. Our current Gov is originally from CA.