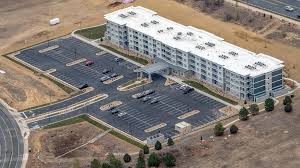 For the 1st time since being in the military I'm living in government owned/operated housing. Overall, the experience has been drama free. That now seems to be changing. 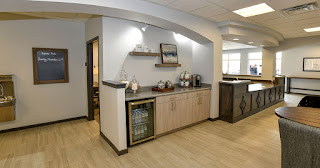 The common area above stretches from the entry to the elevators. Not shown in the photo are three tall tables with chairs that were added, then removed. This has angered some of the residents and seems to be a petty decision by the petty complex manager. A meeting is scheduled with the big cheese for this coming Thursday. I probably won't be there but I've written a letter, at the request of another resident. A portion of the letter follows.

Certain changes have occurred in the common areas that are not enhancing the enjoyment of the residents. This saddens me.

Most of us have lived here less than five months, in my case, since February. I’ve been impressed by the voluntary effort of several residents to build a feeling of community, even family. One challenge facing elderly, as you probably recognize, is loneliness and isolation. That has been mitigated by some of the residents coming together and building a community.

The table and chairs between the entrance and elevators is utilized as a gathering place and I, for one, like it. It is so nice to walk in and be greeted warmly but others. I must add I’ve never seen trash or clutter left when the “group” disperses. Further, I’ve never seen any shunning of anyone; just the opposite. I’ve never felt unwelcomed, and I’ve never heard any malicious gossip or disparaging references to any resident save early on when one group were evicted after destroying their apartment on the 1st floor.

I urge you to not disturb the positive chemistry building at Peakview.

Not a biggy, right? Not now, but what about the future? I applaud the (mainly) women who are taking a stand. A small spat now may well prevent a bigger blowout in the months and years ahead. Unchecked power is destabilizing, IMO.

I think of some of my acquaintances dealing with Home Owner Associations and see similarities.

In any case, I live here and want to be on the best terms with my neighbors. Want I don't want is the toad in the corner office screwing things up to feed his ego.
Posted by Well Seasoned Fool at 1:27 PM

Stories like this are so disheartening. I hope your letter is successful in the return of the table and chairs.

We need to stop this b.s. There are a group of elderly ladies here that are tough!

Hopefully that works, if not, unleash the old ladies... THEY will get it done! :-)

I'm strictly in an auxiliary support role. These are some formidable older ladies.

The last paragraph says it best. I had to chuckle. Work with the ladies, it will pay dividends later on.

There were six of them sitting in a circle this morning plotting. One is a retired paralegal.

How do they justify removing the tables? Fire code?

LL
They don't. The ground floor has a dining hall and kitchen. To the side of the entry is an area with couches, arm chairs, fireplace with a TV, etc. Each afternoon a group gathers there for 'conversations'. The area with three tables and chairs in question is listed as an "Internet Cafe" with a small coffee bar. I don't see a problem. Evidently the Housing Authority manager does.

The issue gets a bit more complex as the building isn't owned by the Housing Authority. They manage it, screen tenants, collect rent, etc.

It is not a fight I want to join. That said, my letter was well received by the ladies. Their goodwill is, I believe, worth cultivating.

Stand by your guns, WSF and sock it to 'em.

LSP
The quality of our management is suspect. Rent checks from 4/1-4/3 are still not cashed.

My money is on you and the feisty ol ladies!

More so the feisty old ladies.