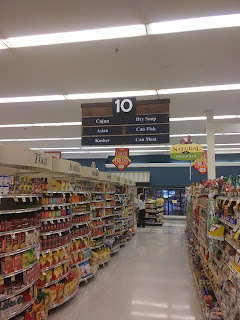 You know you are in the South when you have an entire store aisle devoted to spices.

Back home  and looking at all that was placed on hold. Little stuff, unload the dishwasher, do laundry, visit the post office, and put away luggage will keep me occupied.

My appreciation for all you kind thoughts, and prayers, is profound. Please understand why I’m not responding to individual comments.

In our community there is a grief center (my sister is on the board – is there a health related board she isn’t on?) and both my sister and niece want me to use it. I will. I think I’m doing ok but my niece has threatened grievous bodily injury if I don’t.

Several of you have recommended a National Service Officer’s assistance for my daughter in law. She will, in due time, get in contact with one. Her first meeting, Monday morning, was with an attorney specializing in probate.

The preliminary corner’s report was inconclusive. My immediate thought of a blood clot wasn’t supported. Toxicology reports will take time. As with any veteran, especially one with CRPS, suicide is the elephant in the room. There is zero evidence in his behaviors the day before. He and his wife had been at Cabella the afternoon before where, among other things, he bought a fishing pole for their youngest son and a replacement trigger for a .22. Probably within four to five hours before his passing he had sent me one of his typical obscene texts.

The coroner report will be crucial. Death caused, in part, by his service injuries keeps his disability income in play for his family. A National Service Officer will be helpful in this area.

One of his Afghan medic brothers gave a stirring eulogy that touched me deeply. A parent’s natural pride means you know your child is special. His eulogy expanded that. Travis wasn’t just a good medic and soldier, he was a great one and one the other medics looked to for help and inspiration.  One story  he told brought this out. Travis was in the shower when their position came under small arms fire. Travis arrived in their defense position with his rifle and nothing else. When some officer questioned his nudity, Travis told him if there was a fight he was going to be with his ‘buds’. Seems his three row “brick” with clusters was well earned.

My trip was uneventful. Enterprise didn’t have my vehicle ready so ended up with a Dodge Caravan. That came in handy for the funeral transporting people around. Comfortable, just over 25 mpg for the trip and a reminder of my long term complaints about Chrysler production. Great designs, great styling, and the quality comes out before the name goes on. Seriously, the windshield molding on a 25,000 mile vehicle coming off?

I doubt there are many straight streets in the Spartanburg area. Old wagon trails that grew. My GPS got a workout. Having I-85 under destruction for miles and miles didn’t help.

Making the loop on I-26 and I-40 though the Great Smokey Mountains reminded me of driving I-15 through the Virgin River Canyon between St. George and Las Vegas (except for the vegetation). Once again I was reminded, while we have mountains, the South has rivers that make ours look like irrigation canals.

One interesting experience was on I-70 headed West just short of Abilene. All traffic stopped and the line miles long due to an accident. A pickup/trailer combination with contractor equipment made a U turn across the median. I followed. Four miles East he turned off and I followed. Shortly, we were headed to Abilene on a two lane road.

One thing my daughter in law requested was for me to handle my ex-wife. That I was willing to do and it was an ordeal. The woman is ten months younger than me and looks twenty years older. Material for a future blog post probably.

One more ordeal to face is telling my oldest, autistic, son in Seattle the news. It will be by phone.  I deliberately haven’t told him. My decision, for my reasons. It is set up with his case manager for tomorrow. If possible, I will have a deacon from his church on standby.

My middle son took the news hard. Who expects to lose your 40 year old younger brother? For a complex set of circumstances he wasn’t able to come to the service.

How am I doing? Breathing air and taking nourishment. Life goes on and quitting isn’t an option for me.

I don’t own a TV. In the motel I watched the coverage of the Mueller fiasco, switching from Fox, to CNN, to MSNBC. All those talking heads. None seemed to be ‘reporting’ on the same story. Spin, spin, spin. Haven’t seen such (P)regressive angst since Shillary lost.

Close to home recall is the story. One Facebook page to recall Gov. Polluted has 65,000 followers. With a state population of 5,000,000 I’m not holding my breath.

Posted by Well Seasoned Fool at 11:04 AM

I'm glad you are home and considering some help for the depression of losing a child (Man). A day at at time is all any of us can do. You keep up yours. And good luck with the left coast son.

Glad you're back safe. Take the time, a deep breath, and go visit the center. Hope the other son handles it as well as possible.

Old NFO
He has a lot of support and a lot of people in the area that care for him.

WSF, we are thankful men such as your son lived.

Anger can be a very useful thing, even though 'they' say that anger isn't okay. Most of the time, 'they' don't have a fuckin' clue... either that or they haven't ever had a good reason to be really angry. You have more than one.

I hope for a smooth resolution to all the issues and I'm glad your family is taking care of each other.

Grief is as individual as the people who suffer from it. Don't let anyone tell you how long your should be sad/angry/however you feel. You get through it in your way. It's not wrong to ask for help and support, either.

I know we're strangers on the internet, but I'm available for you to vent anytime you want to. No judgement.