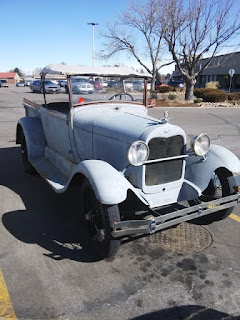 Not ready for Pebble Beach. Neat, just the same. 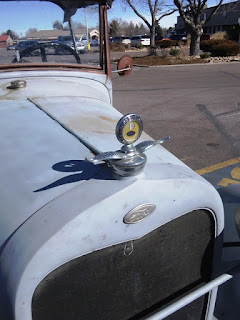 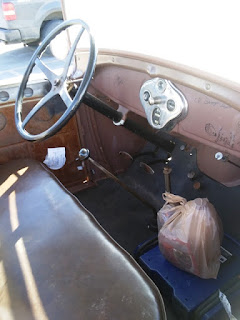 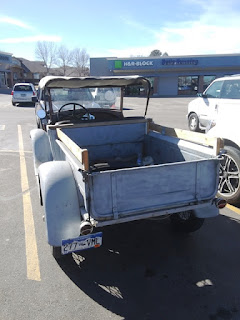 Didn't see the owner. Didn't have time to wait around.
Posted by Well Seasoned Fool at 2:52 PM

Nice Model T pick-up. Most of them have small blocks and automatics in them, but I'll bet that one has Henry's four banger in it.

drjim
Not an expert but I think that is an A, not a T. Wheels/tires seem to indicate an A.

LL
There are a couple of restored/rodded one around town. I am OLD enough to know people who had them as their principal vehicle. A neighbor had two bodies, pickup and coupe.Spring and fall, he would swap bodies.

A few days ago when I snapped that pic it was 40°.

Need to clean my glasses!

Old NFO suggests it is an early Model A. V-8s were introduced in 1932. However, your chances of finding a totally stock Model A is up there with winning the Powerball.

Yes, 28 or 29 Model A Ford. Note the oval shaped speedo, only like this in 28/29, then they switched to a round speedo in 1930. Also, the hand brake lever is located directly above the gear shift lever, Edsel Ford changed this location to the right side of the shift lever in 1930. Lastly, the headlight mounting bar is straight across the radiator and was produced in 1928/29, in 1930 they changed it to a curved bar from fender to fender, no straight area across the radiator anymore.

Thanks for the info. If I encounter the owner I'll ask him.

With deference to LL, I remember seeing a Model T parked on the streets of Old Milwaukee in 1970. What was happening, I understand now, is that hippies were fixing them up and driving about UWM as some kind of novelty Whole Earth Catalogue display. Whatev, I remember those old cars and like the memory, I was a child!

I've seen a few Model Ts but never driven one. I remember my father and his siblings talking about them. When the road was steep and slick, they would back up the hill - better traction.