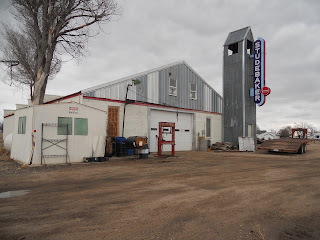 Business today took me to the far NE corner of Colorado. Colorado 14 takes you through New Raymer, a once thriving town, where this sign survives. Nice building. 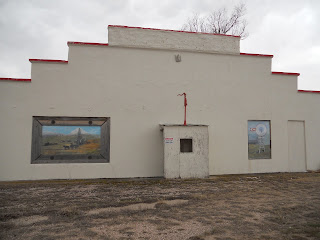 I'm a sucker for any and all steam engines. Another once thriving town has this. 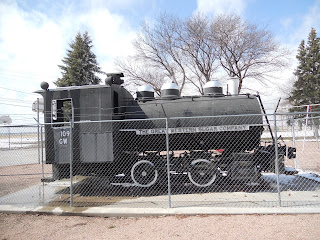 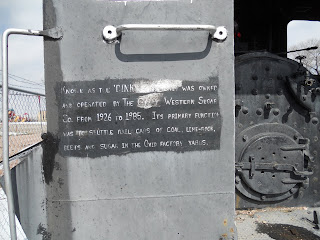 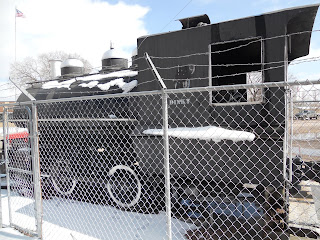 There are a lot of missile silos along the route and extending into Wyoming. I'm sure the Russians (and maybe Chinese) can detect which ones are active, and which ones are closed with their satellites. If not, the Air Force makes it easy. The active ones all have Port-A-Potties. 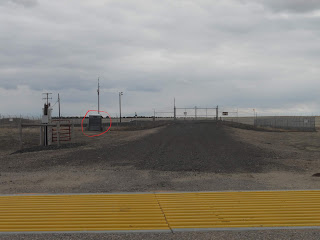 Just for fun the Air Force should put one on every site.

A 312 mile round trip to visit one property to document, photograph, and submit a report.

Profitable, for me, way to spend a Saturday and still get to poke around the Prairie National Grasslands. More, please!
Posted by Well Seasoned Fool at 9:56 PM

The roads less traveled are interesting to take. I always wonder about the circumstances that caused these businesses to close, and why some small towns prospered, while others withered away.

One of my buddies used to go through small towns in the Midwest looking for dealerships that were closing or out of business, and he'd buy up their stocks of parts and literature. Some of these small dealers had NOS parts going back to the 30's and 40's, and he'd flip those parts through Hemmings Motor News. He bought a semi-load one time for about $10k, and made well over $100k on the contents. I'd help him sort the items out, and we marveled at some of the old boxes and their contents.

I often look at some of the old vehicles and wonder about their service lives.

Some of the residents of small towns are innovative. One town on that route has a liquor store plus being a hardware store.

Just being a smart businessman offering his community what they're asking for.

Sounds kinda like a new spin on the old General Store.

And probably bubble gum in there somewhere... It's truly a shame to see those small towns die when they get bypassed by the major roads. That is happening to the next town west of us, as the highway now bypasses them. They used to have three grocery stores, two pharmacies, etc. Now ONE convenience store... sigh

And Emperor Polluted and his Evil Minions want to stamp out the energy industry here.

They will certainly cripple it.