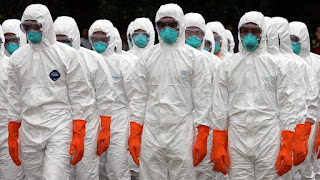 This year’s flu season has been bad. Just in terms of pure speculation, is it random circumstances or deliberate?

Looking back, the 1918-1919 “Spanish” flu epidemic killed around  675,000 Americans, mainly otherwise healthy adults 20-45. Worldwide, the mortality rate was around 2.5% of those affected. The economic costs were staggering as whole communities became quarantined and commerce nearly halted.

The potential to weaponize  flu has been recognized.

Many bad actors worldwide can develop bioterrorism capability with far less costs than any nuclear or EMT capability. Who? Cuba, Venezuela, ISIS, Iran, North Korea, Pakistan, or take your pick. All have motives for taking out the USA and/or the West.

These are obvious. What aren’t so obvious are what the globalists, the Deep State, George Soros, or others are willing to do. During the 1918-1919 epidemic wholesale suspensions of civil liberties and legal processes were suspended.

This type of activity occurred all over the country, if not the world.

A pandemic would be a perfect opportunity for (P)regressives to achieve their goals. We must not forget  Rahm Emanual.

You never let a serious crisis go to waste. And what I mean by that it's an opportunity to do things you think you could not do before. Rahm Emanuel

Oh, WSF, you are a paranoid old fool. Yes, I damn well hope I am.

I know of otherwise healthy people in the prime of life who have died because of this flu. It's been a very bad year. But there are not the sort of numbers you'd see from weaponized strain. That doesn't mean that it can't happen.

Just because you're paranoid doesn't mean that they're not out to get you.

Better paranoid than dead (or enslaved).

I have heard the vaccine is about 8% effective this year. Then 'they' say get the vaccination anyway, it will make your flu get better faster? I call bullshit on that one, how would they know???? 'They' are making an awful lot of money on the vaccine.

I wouldn't put anything past the assholes in charge. Including causing the deaths of large swaths of the population.

Flu is an RNA virus which means it constantly mutates so you can come down with it's "offsprings" after you overcome your original flu. Makes a broad spectrum hard to make. The viruses in the shot are alive so all kinds of preservatives are needed to keep them alive. The preservatives may be worse for you than the flu.

I truly hope so... sigh... Every damn time I got the flu shot, I got sicker than a dog for two-three days. I DO take the pneumonia shot though.

My mind drifts and I start thinking all kinds of bad thoughts.

I don't take any shots, of any kind. When I went down with heart problems and got the pacemaker, they "caught me up".

All injectible solutions come packaged with a fact sheet. My son, the ex medic/EMT will not allow any family members, or himself, to get a shot until he personally reads the fact sheet. I have a touch of sympathy for anyone who tries to intimidate him. More than once, he has insisted on a different formulation.

Also, I was born in Gunnison. Coincidence??

Maybe. Cold place in the winter. Even Steamboat kids who attended Western State complained about the cold.