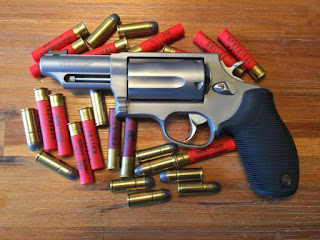 My late great friend, Dirty Al Imhoff, was not stranger to firearms, or using them. After leaving Army Special Forces, he worked for awhile in Africa for a unit who sported an Osprey symbol.

His health and eyesight failing, we discussed self defense options. He still had hand and arm strength. The critical need was defense inside his 40’ Prevost motor home parked in the Arizona desert. The secondary need was in his car. After some talk, he settled on two handguns. First, a Taurus Judge. He was sure he could score hits from his bedroom in the rear to the entrance in the front. 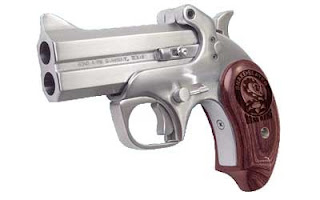 The car handgun was a Bond Arms derringer in .45 Long Colt. Top barrel loaded with a .45 Long Colt and the bottom with a shot shell. He decided any action in and around his car would be at bad breath range.

Given his background, I wasn’t surprised he practiced with both on a regular basis and had acquired some interesting .410 loads.

He never had to put them to their intended use. Per the coroner, he died from a blow to his temple area caused by fainting and striking a countertop corner.

To the point of all this. Most of us look for versatility in our firearms. There are times when getting something to fill a specific and defined task is more appropriate. Only you can decide which way to go.

What has ridden in the passenger footwell of every vehicle I've owned since  around 1973. 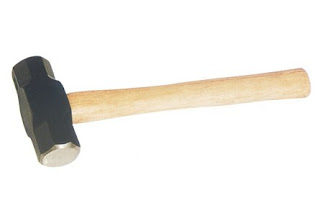 And what rides in the center console of Sisty's F-150. 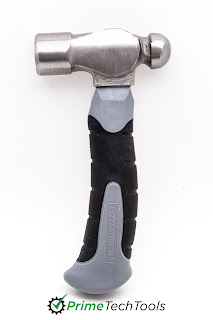 The neighborhood I lived in for several years downtown Brighton, CO was much the same.

The Taurus Judge is a good self defense weapon. .410 is an under appreciated cartridge both with rifled slugs and with #4 shot. You don't get enough pellets with 00 buck in my opinion. If you're going to have one self defense weapon, it's an excellent choice.

LL
For Al's needs and his physical condition it was the right tool.

I used to carry a 24" long 1/2" drive breaker bar, with a socket on it for legality, inside my car all the time back in Illinois.

WSF, it's been legal for me to carry nearly whatever I want to for most of my life. Be that as it is, I almost always carry a tomahawk. I like it better than a hammer or a baseball bat and an axe is legal in places like Russia, China or even the UK where the size of a legal knife blade is 3". In the US and even within the restrictive California Penal Code, there is a provision against a club (felony) but not an axe - which is a club with a blade on the end. A tomahawk is merely a refinement on the club, but in a fight it's lethal.

I may blog on the subject next week.

drjim
Adapt and survive. Beats living with your head up your .........

LL
I've saved my ass with an entrenching tool. May blog on that.

What's the effective range on the Taurus Judge's .410 rounds? 30 feet?

I myself swear by my Taurus .357 Mag. with a 4" barrel, it's good to 30 feet, too. But with more damage...that, and it can shoot through doors and walls with relatively good efficacy as well.

Fredd
At one point Dirty Al carried a Dirty Harry .44 Mag and was familiar with any number of infantry weapons. The Judge was selected based on his physical condition.

I have a Charter Arms .44 Special that I've carried for 30+ years. After I got hit with macular degeneration had a peep/ghost ring sight. I can still put 5 out of 5 on target at 25'. By on target, all in a torso sized target but none in the "bullseye".

I have a Spetsnaz entrenching tool in the Jeep. One edge of the shovel is razor sharp, and the other has serrated 'saw teeth' on it.

drjim
The Spetsnaz have a culture developed around their shovel. From what I've seen, similar to rifle/bayonet practice.

If it works, it ain't wrong. And different strokes work for different folks. I carry what I need to carry, depending on location... :-)

Great post and I've enjoyed shooting the Judge. These days I keep a sharp Kukri in the rig (thanks, LL) and it's worked well. NO ONE has tried to storm the truck.

That said, I'm with NFO, carry as appropriate. Obvs a massive Gurkha knife and a .45, sorry, forgot to mention, for the Texan countryside but maybe something else for Austin. Or San Francisco. Hmmmmm.

LSP
Isn't it against the law not to be armed in rural Texas?

My favorite car tool has been, since my dad gave me one in 1982, a framing hatchet. Which looks just like a hammer-headed tomahawk. But it's a tool, not a weapon...

Eswing makes a really nice one.

And I've used one of my framing hatchets to cut into 18 gauge steel. The head won't cut into 16 gauge steel, but that's what the hammerhead is for.

Dad used to carry one when he was a teen in Louisiana. That and a pair of fencing pliers were two of his favorite tools ever. Great for everything from fishing to ranching, and you're well-armed with both.