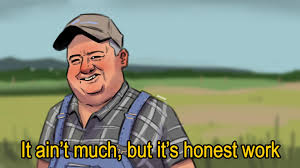 Working at age 75 is challenging. First, finding something to do, and second, finding someone to hire you.  The third issue is physically being able to do the work.

Right out of the Army I got a job working on a core drill. We had a three man crew, the driller, helper, and water truck driver. Damn hard physical work. We had an old man driving the water truck. He wouldn’t admit to his age but he was probably in his 80’s. Watching him, I realized he never moved until he needed to, never picked up drill stem higher than necessary, and conserved him strength. I never forgot the lesson I learned from him. It didn’t matter in my younger years but now it does.

This past summer I worked driving a shuttle bus hauling water truck drivers out to the producing oil fields in Northern Weld County. Quit when winter came. I didn’t feel up to driving two lane roads with no shoulders in Colorado blizzards.

For the past 18 months I have been acting as a “collection agent” delivering dun letters to people behind on their mortgages. Paid on a per job basis. Very much part time work.

When the shit hit the fan in 2002 and banks quit lending money for car loans, I fell back on my younger skill sets in the construction field, inspecting and securing houses abandoned by their owners. The collapse of the subprime mortgage business coupled with George II’s economy kept me busy. This continued under the Lightbringer’s inept presidency.

Recently a company I did work for back then contacted me. I’m currently going through their HR’s torturous road. Assume I survive the journey; the job is a simple inspection for insurance companies. Simple, yes, but convoluted. Sketches, measurements, photographs and the use of computer programs (me weakest skill) are all part of the process not to mention finding the property in the first place. Yeah, Magellan!

I’m asked why I don’t get back into sales. Simply, I don’t want that much interaction with people. Yes, my daughter-in-law’s label GOB (Grumpy Old Bastard) is apt. Being a WalMart greeter/loss prevention isn’t for me. 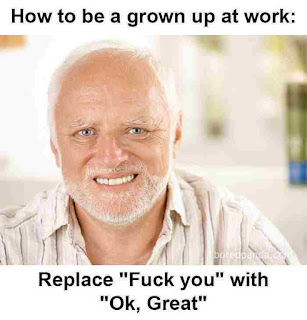 I don’t need to work, financially, but I enjoy getting out and about and solving problems.  The problem, while I don’t care about age, my body does. It reminds me frequently. Oh well, so long as I’m breathing air and taking nourishment, I’ll keep on keeping on.

You can't cheat the reaper, WSF. You can try. Many do. But age (as your old drilling boss might have said) is a limiting factor.

I admire your spunk, WSF! You're reply to Old NFO is spot-on!

Personally, I don't think I'm "employable" any longer. I give thanks about it most of the time, but miss the camaraderie at other times.

With respect to LL, Don't Fear The Reaper.

I know, easier said than done, but there it is. Good luck with the next job.

LL
Have no fear of the reaper. Do fear a vegetative fate for years in a care facility that was the fate of my mother. Reaper (or agent) meets dirty white boy. Could be epic!

LSP
No fear. When I go I go but I won't be sitting on my ass if I can help it.

I thought about a part time job, but I slapped myself in the face a few times with a 2x4 and felt better about staying retired. My only limitations right now is my lower back and answering to someone 3/4 my age.

CP
My experience with much younger supervisors has been generally good. Two - three days into a job you need to let them know you are there just to do the job and they are there to be the boss.