Conversation with a Liberal 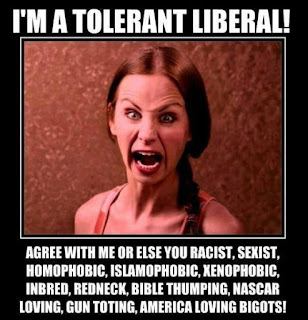 Liberal.  "You are against President Obama because he is black"!

My response. "No, I'm against him because he is a stuttering clusterfuck. The only reason you are defending him is because he is black".

I seriously do not understand the racial argument with regards to Obama. Everyone who voted for him knew he was black, so it's not like it was a surprise. And, well, he won the election.

So disliking his policies and the appalling things he's done (like wiping his ass with the Constitution) have nothing to do with his skin color.

Do people not realize it makes them look stupid when they're unable to see past his color and address the issues?

Oh... and forgot to add that if you don't like Obama you're obviously a cousin-humping redneck. Everyone knows that.

It is fun to hear them sputter.

Well I do have some hot cousins.

LOL. I feel your pain.

Only because we have an incompetent in the White House.

Back when Dixie Lee Ray was Governor of Washington I said she proved women can be just as incompetent as men in high public office. The Lightbringer has proved the same for men of "color".