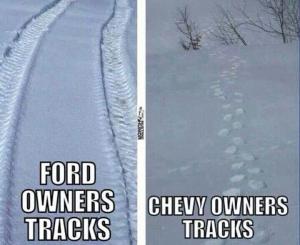 Old NFO, can you feel the love?

A somewhat younger friend is a medically retired Marine and EMT. He is a good mechanic and works at that trade when he can. He is a die hard Chevy/GMC man. We seldom agree. A recent conversation.

Mike.  “Why do you think most mechanics own Chevys?

Me.  “They grew up fixing them while the kids with Fords were picking up the Chevy guy’s girlfriends”.

A few years back Mike was hurting for money and sold me a mid 70’s ½ ton pick up with my promise I would sell it back to him first before I sold it to someone else.
We both worked with a man, David, who had a 6.2 diesel powered Chevy pickup. One day I was driving to work in “Mike’s” Chevy and saw David pulled over on the shoulder. His truck had quit running. I stopped and gave him a ride. As we continued on to work, the ungrateful wretch asked,

“How does this turd run, anyway”?

“It is hauling your fat ass to work, isn’t it”?

Mike bought back “his” truck eventually but only after I put a new clutch in it. Of course it needed a new clutch, according to him, because of my bad driving. Such friends I have.

Outside of the car business, I’ve owned pickups for my personal use until I got around to selling them,  a Dodge, two Chevys, three Mitsubishis, an Isuzu (Chev Luv), a Geo (Suzuki) Tracker, two Fords pickups and a E 350 cargo van. The Fords ran longer with fewer repairs than any of the others.

I realize I won’t change the minds of those who do irrational things like joining the Marine Corps or buying Chevy pickups but hope by bringing up the subjects, perhaps it will keep a few people from those ghastly fates. Please, no need to thank me. I do it as a civic duty. As always, YMMV.

Posted by Well Seasoned Fool at 5:49 AM

Well I remember the arguments between my Dad and his brother, Uncle Charlie. My uncle was a die hard Ford guy, my Dad hated Fords.

Family gatherings have seen some heated discussions on the subject. A cousin, raised on Fords married a GM fanatic. Bet they have had some interesting negotiations in their 30+ years of marriage. Last time I visited, she was driving a Ford Fusion and he had a Buick.

I owned a Chevy Silverado once. Only once. I drive Ford F150's now. I had an F150 that I gave to my grandson upon his high school graduation and bought a new one that is my baby. I just hope my Judy doesn't make me choose between her and the truck. I will miss her, but will console myself by going for a drive.

You don't put RAMS in your books so you have that going for you.