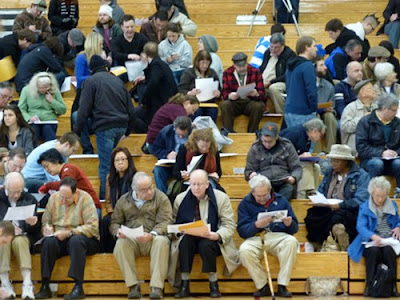 Went to my House District Precinct Caucus last night. Usual Democrat function; disorganized and argumentative. This is a redistricting year and many, including me, ended up in a different precinct. Much confusion.

Differences from before that struck me. One, and only one, Obama shirt. The woman had pined a 2010 badge over the 2008 logo. The women "of a certain age" that were there in force two years ago are gone. Somewhat disappointing as my fellow Blue Dog and I weren't able to torture them. A few new faces but mainly the same older group that shows up every time.

There were a few Obama supporters working the room. The comments I overheard about the Lightbringer were of the knee jerk loyalty nature, with no inner fire or excitement. The big focus was on local issue and local candidates, like county commissioners.

Some twit was passing around a two page "Progressive" broadside with claims about Republican votes over the years. I made myself very unpopular by pointing out the erroneous claims (Social Security, Interstate Highway System, etc.). The Progressive folks got quite pissy; a fine conclusion to an interesting evening.

Much to every one's relief, I declined the opportunity to become a county delegate. My Blue Dog friend was selected.

Was it worth the effort? I don't know. I do know I can squander a few hours a month trying to make a difference. But hey! What is title of my blog?
Posted by Well Seasoned Fool at 2:29 PM

I'm glad to see that you are participating in the process. Keep up the good work & the stick poking.

@ Sisty. Stick poking is a specialty!

@ NFO Once was a precinct committeeman. Once was a GOP county delegate. Might make a blog entry one day.