Stupidity May Save Us: Travon Martin Edition 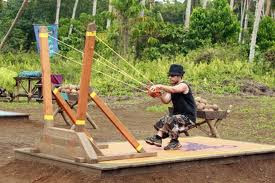 The Democrats have lost more than one Presidential Election running on a gun control plank. Obama deliberately ignored the subject.

The far right conservatives are doing a bang up job giving away the next election by attacking Roe vs. Wade and the whole contraception issue. They would rather be "right" and "stand on their principals" than realize they can't tell over half the population what that group can, and cannot do, with their bodies. They need to go back and listen to Loretta Lynn. The candidates need to stop shaking that money tree.

I'm a Democrat, Blue Dog faction, and a "Anyone but Obama" voter. I still get a ton of party emails, all soliciting money, and the authors are beating the drums about the women issue. I know many hard core Republican women (like my huge extended family) that are truly pissed.

Now we have the whole Sanford, FL mess. The race baiters are going all in. Unintended consequences? Read Beat and Release.

This is a man who has walked the walk and talks the talk as clearly as anyone you may read.

This "all in" by the Lightbringer and fellow travelers may just be what the country needs to wipe out white guilt and get people energized. Wonder how it will play with the Hispanics? Like, the Lightbringer has already fairly well screwed them.

My thoughts on the Travon Martin issue? Let the Sanford, FL criminal justice system handle it. Same reaction I had when O.J. was acquitted. The jury listened to a year's testimony and found him "not guilty". If they got it wrong, it is on them and the idiot judge. No system is always right, all the time. What else do we have?
Posted by Well Seasoned Fool at 6:30 PM

Good post, and Beat and Release hits a home run with that one...