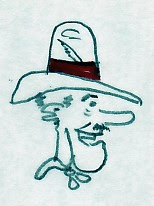 This is a story that Waco Walmsley
doesn't too often discuss.
It's about when he ran for the president's job
and all the resulting fuss.

You see, he allowed himself to get
into one of them big debates.
He didn't reckon that it'd be seen
by the whole United States.

When asked to describe the perfect marriage
his opponent turned and ran.
But not old Waco. He says, "I think
it's between a woman and man."

The subject of taxes came to the front,
and Waco allowed as how
they'd be okay as long as they don't
take the en-tire price of a cow.

The reporter makes a big mistake when she
asks what he thinks about schools.
Waco grins and says, "If reporters attended,
they wouldn't turn out such fools."

The reporter totally loses her cool,
and calls him a Chauvinist Pig.
Waco squints his good eye and says,
"At least I ain't wearin' a wig."

The reporter yells, "I'm not wearing a wig!
This hair all belongs to me!"
"Maybe so," says Waco, "but my opponent wears one.
It's as plain as plain can be.

"And I got to tell you, it makes me wonder
what else don't we know about?"
Now, Waco's opponent, who's close to tears,
lets out a defiant shout.

He figures it's time to take a stand,
and to make some sort of defense.
He swings at Waco, which anyone knows,
shows a lack of plain horse sense.

Well, Waco decks him, right then and there.
sayin', "I ain't cut out for this.
Find somebody else to run for this office,
it's somethin' that I won't miss."

So that's how Waco was almost elected
to our country's most powerful post.
Folks say he'd surely have won because
he's the candidate they liked most.

But Waco says, "There's a lesson in this,
it's the way things always have been.
In any election, you got to remember
the best man don't always win."

From my pal. Hal Swift, Nevada Poet
http://www.cowboypoetry.com/halswift.htm
Posted by Well Seasoned Fool at 7:13 AM

Well said, and an 'honest' man or woman doesn't stand a chance...

@ NFO Seems we always get the choice of the "lesser of two evils".