Good By, I Found You a Good Home 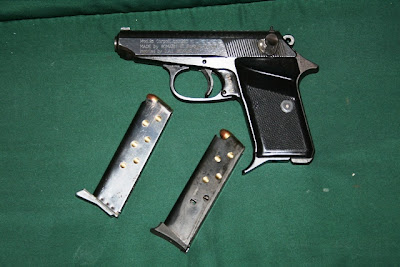 Three years ago, decided to get a CCW permit. Took the eight hour class; passed. Now the “practical”. Seems they expected me to fire from 100 to 200 rounds in a day at the range. WTF? No way I’m putting even 50 rounds out of my .44 Special with a 2 ½” barrel in one day. Superman I’m not.

Purchased a “cheap” Eastern European Walther clone in .380 just for the class. Ended up not following through with the CCW process. The additional $200 or so to the local sheriff pissed me off. Stayed “outlaw”. Fuck em.

Really didn’t like the .380. Had the trigger reworked. Still didn’t like it. So I sold it to a young friend. I’ve been shooting with him. He is safe and responsible. He is happy, and I’m happy with some cash to spend on what I do like.

Oh, the agony of having to decide what to buy! Feel my pain.

Youngest son has a 9x18 Makarov I like. I still miss my .22 revolver. Have always wanted a Colt Woodsman or similar from Ruger. Still upset about the deal I missed by two days and fifty dollars on a pristine .30-.40 Kraig for under $400. My first firearm, bought on my own with my own money, was a Kraig. Think I was around fifteen. Should I stop being totally cheap and get a new Savage package in a .270? Decisions, decisions.

So it is back to lurking around gun shows, gun stores, and Auction Arms. Painful yes, but I will survive. At least there is no significant other to consult (not that I ever did).
Posted by Well Seasoned Fool at 7:41 PM

Hope you find the right gun :)

Lurking works :-) Maybe not tomorrow, but sooner or later! Glad you were able to move one!

@ Julie It will happen

@ NFO Went to the gun show today. High prices. Only decent buy was a Bond Derringer, new, with .45 Colt barrels and spare .357 barrels. Something I might get later.

Got a Mak. Like it. Nice little "pocket rocket" (E German model) that hides well and hits what I aim at.
If ya buy one, ya gotta change the original grips, they suck.

Thanks for visiting and commenting.

Been awhile since I've been shooting with my son. His Mak if from Bulgaria. Don't remember much about the grips.

Yesterday at the gun show didn't see any Maks.

Taking the CCW class on Saturday with the aforementioned Mak. Can't wait!!

@ FDIL Good for you. Hope you can get some range training, too. Neither your husband or I are as good as we think we are!