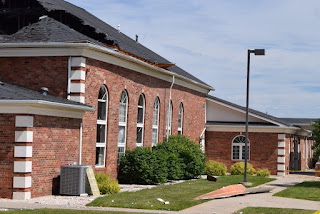 Church, 2 miles from my apartment, hit by lightning and set on fire. Services were underway when it hit. No one was injured.

Last night we had cloud to cloud lightning and the sound of thunder went on and on.

I blame all the wind farms for disturbing the normal airflow. Hey, as "scientific" as most of the climate change bullshit.
Posted by Well Seasoned Fool at 9:46 PM

Monsoon is spinning up in Arizona. Lots of thunder and lightning.

It's bad luck to attend a church that's hit by lightning. That's not spiritual or even intuitive on my part...just superstition. Sort of like sailing on a ship where the rats are jumping off and making a swim for it.

Monsoons make it to Colorado. The meteorologists label them, "Albuquerque Lows". The flow gets blocked by the Front Range and the East side gets hammered by stalled rain. Then the slot canyons get flooded.

Regarding the church, a neighbor made a joke about the sermon pissing off the Lord. Bad taste, but I laughed, which proves my low character.

Which is why I'm taking some precautions to mitigate lightning damage.

Out first Spring here we had huge winds, and this year we have lightning.

Welcome to the Rockies!

Word of caution. Stay out of the slot canyons (Cache La Poudre, Hwy 34 to Estes Park) when it is raining in the foothills.

Yep. Got no intentions to go "exploring" when the rain is coming down. Three years ago (?) we were here visiting, a storm came up, and washed out the culvert on N Co. Rd 23 just South of Rist Canyon Rd while we were watching from the little place The Kids were house-sitting. Had to take the road all the way South along the reservoir from their place to get back to FoCo where we were staying.

My wife never saw anything like it before in "real time", and it scared the living daylights out of her!

Back, way back, 1924 before Horsetooth Reservoir was built my maternal grandfather had a farm now covered by water. Bellevue/LaSalle was regularly flooded. My mother was born 6/14/24 on the farm during a flood that completely isolated them. There was a small city there, Stout and large limestone quarries.

There's a church across the road from me, and so far it's remained unstruck. I take that as a good sign.

I've read about Stout and the quarries and the boozin' that went on there. There's a sign at the South end of the reservoir that says "Stout population 47-1/2".

At least the steeple didn't get 'departed' like one down here... Steeple apparently was blown about three miles, so they moved the church back 'under' the steeple at the new location...