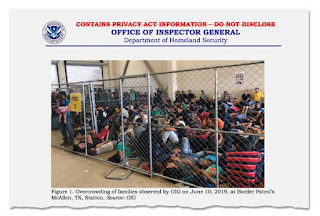 2.  Why is it our obligation, as a country, to provide Holiday Inn Express level accommodations to those breaking our laws.

3.  Who stopped the flow of money to the agencies responsible for housing these illegals .

4.  Who created a situation where the managers of these facilities have been forced to spend funds allocated for other purposes to keep even a modicum of safe holding conditions.  The same managers theoretically face charges of breaking laws by moving these funds.

5.  Who believes these Democrats give a rat’s ass about the “plight” of these illegals beyond providing television sound bites.

The Democrats fight any kind of immigration reform.  Why? It might help President Trump. He along has showed a wiliness to tackle really tough problems. Witness prison reform at the federal level that he has pushed through.  He is perfectly willing to tackle immigration.

President Trump is hated because he is an outsider, and doesn’t give a flying fuck about all the carefully constructed norms of the swampers. Want a small but telling example? His 2018 White House budget was $22 million less than the preceding year. The First Lady has a staff of four. Lots of rice bowls being threatened.

Readers of this blog know I don’t like him on a personal level which means jack shit compared to his performance as President. Over the years I’ve work for, and with, many individuals I loathed personally but admired their ability to perform their jobs. (Surprisingly, some of them didn’t like me!)

My hope is these (P)regressive Democrats mouth’s have overloaded their asses and voters will send them packing in 2020.

ADDENDUM: Swiped from a FB posting.


No one mentions that illegals are free to

to mexico. They aren't our prisoners.

Jews imprisoned by Nazi Germany didn't climb fences to get into detention facilities and they were not free to walk out (south toward their country of origin). In fact, I'm nearly positive that CBP would pack a nutritious sack lunch with a Coke in it for any illegal aliens who wanted to go back over the wall the other way.

LL
And give them a ride.

Agree with LL, they 'know' they'll get released in the US sooner or later so they can disappear.

A friend of mine sat next to a NY businessman who's had dealings with Mr. Trump on a flight a few months back. This gentleman described the president as a ruthless businessman and something of an a$$hole, but also said he was the right man for the job today, and would vote for him again.

I still don't understand why the progs cannot accept the idea (or fact) that they are ILLEGALLY here. They do not deserve free anything but a ticket back to south of the boarder... or shot crossing the border. All they see are votes.

Coffeypot
I often wonder if (P)regressives are too busy getting in touch with their feelings to think.