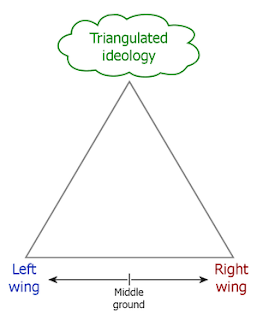 You may wish to clutch your pearls as I’m about to say something praising Bill Clinton.

The current political climate is uglier than anything I remember. The strident personal attacks and rigid ideology positions is dividing our country in ways I never imagined.

Clinton faced big problems after 1994 with the election massacre of the Democrat candidates and the Republican control of Congress. He turned to triangulation, which Dick Morris claimed credit.  It worked by sidelining the extreme wings of both parties. We need something like this now, IMO, before our country implodes.

Triangulation is a way for a compromise all can live with, grudgingly, instead of the current climate where one side believes, rightfully, they are disrespected and positions anathema  to their beliefs are shoved down their throats.

My hope is the midterm elections will bring something of a balance and more level headed politicians will use triangulation to get our country moving forward.

Cogent bit over at Peter's place--

Left wing, Right wing.
I to respect their beliefs. But I want to be left alone, and I don't want to pay taxes for stupidity.
I don't know how we get out of this.

GB
You nailed the basic problem. Most people just wan to be left alone and others want to control most aspects of our lives.

If the Republicans achieve majorities they will almost certainly undertake impeachment proceedings against FJB. If they are successful in that undertaking, they'll do the same thing to Camela Harris. I only see things getting worse until the civil war shakes things out.

I realize that is not what you suggest and I don't want that either. An impeachment undertaking will result in the democrats sending their inner city people on a burning spree. That will either keep going or people will stop it.

LL
I fear you are correct.

One can hope... But I'm not thinking that is going to happen.

Old NFO
Seems to be a consensus.

With all that untidiness in the Ukraine - our new de facto 51st state - I can only hope we get that far. I fear those alleged "leaders" in DC are not paying attention to anything but their wallets.

WWW
As always, the swamp survives. How do we drain it?