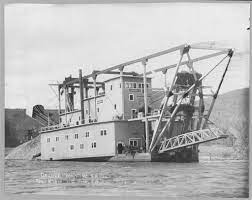 While not owning a television for several years, I do enjoy offerings on YouTube.  For whatever reason, I enjoy watching tow trucks, especially off road recoveries. One channel I watch.

This one was different and involved gold dredges. That stirred a memory. In the aftermath of WWII returning veterans found scarce jobs, as much hadn’t changed from the Great Depression. My Dad found a job in Breckenridge, CO operating a gold dredge. One day while trying to put cable back on pulleys, his coworker took up slack while my Dad’s fingers and thumbs were wrapped around the cable. All his finders and thumbs were broken. The local doctor used metal splints to fix his broken fingers. My Dad had his brother bend each splint until my Dad’s hands were in a claw shape so he could still grasp the dredge controls and continue to work. His main complaint was not being able to button his Levis.

Along that same time I, at age four, fell out of the back of an old Ford sedan doing 40 mph or so on a dirt road landing on my head. The scars remain to this day. My Dad and uncle held me down on the floor while the “doctor” stitched my scalp together. The “doctor” was a former service medic/corpsman and what was available in what was then a remote Colorado mountain town.

For many years I was teased about having, “rocks in my head”.

So, WSF, is there a point to this? Yes, woke breath, generations in this country survived by doing what was necessary to survive. The solutions weren’t elegant. You survived or didn’t but nobody seemed to be appalled and nobody looked to the “government” for help or even expected help.

We have lost that expectation and are poorer as a people and  a nation, IMO. As always, YMMV.

There is a risk aversion problem with many young people (not the people who work in oil fields and in a lot of "dirty jobs). The Internet-addicted who are allowed to live in grandma's basement are the ones I'm speaking about. It's interesting that they're all leftists, isn't it?

Do you have any proof that there *aren't* rocks in your head?

My dad and his twin got into all kinds of trouble growing up, their dad was a mining engineer and they moved all over the Western US. They both had the same kind of medical 'care' that you got. Uncle Dean passed away many years ago (accident) but Dad is still hanging in there. So perhaps a few rocks are of benefit.

Our military forces are an indicator.
Machines are taking over there too- Drones, in the air and on the ground.
The ARMY has not met its recruiting goals for the past few years. Those that do sign up are either ultra-patriotic, or simply looking to get an education to make them marketable for a civilian job when they can get out.
LL is exactly right. Life is JUST TOO DANGEROUS for most of 'em today.
(But they have unlimited lives on their computers.)

Ami
Sisty and other relatives insist the rocks are still there.

GB
Good points. One thing that I find encouraging are skate parks and kids on skateboards. We still have kids, of both sexes, who court danger.

There are two dredges still up at Breckenridge. One is a restaurant in town, probably no original parts. One is a just the remains of the deck up Tiger Road. Interesting to see the tailings piles from the dredges. Casey showed a still overhead of the tailings though does not give a good sense of scale. The boats were assembled by hand on site, all the parts hauled in when there were barely any roads in the areas. The dredge piles go on for hundreds of yards. The dredges crawled / clawed, I have no idea how fast, though guess imperceptibly slow. All to get a little gold dust. Massive effort and in many cases, economically worthwhile.

Gold mining and placer operations were dealt a severe, even fatal blow, in 1934 with FDR issuing Executive Orders.
https://www.mining.com/beware-official-us-government-price-for-gold-is-only-4222oz/

On the other side of Breckernridge around Fairplay a lot of dredging occurred and some of that machinery still exists.

The Rockies and Sierra Nevadas still have extensive deposits of gold, silver and tellurium. With the Federal Government/Federal Reserve Bank poised to grab all profits, the is little incentive for mining.

Dead on the money. If they can't do it with a click, or hire it done, it's not going to get done... sigh