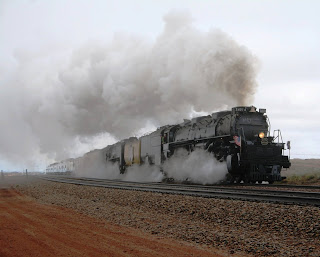 Covid over, the Union Pacific has released a "Big Boy" tour schedule. 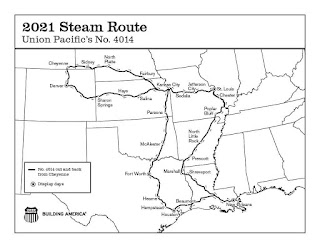 I will be somewhere along the tracks getting my steam engine fix.
Posted by Well Seasoned Fool at 9:22 PM

Let me know if you don't mind somebody tagging along!

As always, happy to have you along. I'm thinking Pine Bluffs, WY. The last time they headed East they had a two hour mechanical delay. Pleanty of time to decide.

Had to look up Pine Bluffs. A bit of a drive, but I'm sure it's got some great scenery!

It will be in Denver Labor Day then come North through Greeley and Ault to Cheyenne. Ault will be the closest to you. TLG might enjoy seeing it. They may stop in Greeley for a "whistle stop". They did on their last Midwest tour.

Now I need to find the actual schedule... sigh...

A more detailed schedule will come out nearer the departure. The cities where it will be on static display (Ft Worth, for example) on shown on the map.

Fix indeed. We live in Arlington next to Ft Worth. I wonder if they still have the GPS in place so you can track it in real time.

Challenger came through Chico, CA in Sept of 2005. I got some close video as the train went by a remote crossing. Then my youngest son and I chased it up the road a few miles to a scheduled maintenance stop. Got to shoot more video standing along side as the crew grease up some bearings. Burned it to DVD. Give me a holler if you would like a copy.

RHT447
I imagine there will be live tracking.

Appreciate the offer but I have lots of stuff. drjim (Every Blade of Grass) and I were right next to it at a stop when it went on the last tour. I was lucky enough to have a tour of the the Cheyenne steam shop and was next to it while it was disassembled.

Age eight, got to ride in the cab of a D&RG Mallet 2-8-8-2 (3600 series in D&RG service) in helper service from Tabernash, CO to the West Portal of the Moffat Tunnel and back to Tabernash.

The UP system has a maximum 2.6% grade (Ogden, UT to Evanston, WY) while the D&RG has/had some 3% grades (Tennessee Pass). The Mallets were a bit smaller and designed to handle shorter radius curves, particularly in Byers Canyon (Hot Sulphur Springs, CO).

I may have posted this here before, don't recall. Enjoy anyway.

I was about 8 when my mother and I rode the Shasta Daylight from Klamath Falls, OR to Sacramento, CA. When we stepped of the train, #4294 (opening still shot) was on static display outside the station. To a skinny kid, it look as big as a battleship. Little did I know then that decades later I would go to the display pictured and climb up in the cab with my own kids.

The passing scenery in the video reminds of my California childhood in the Gold Rush country in the mid 60's.

Wow! Great video. I will be watching it several times. Thank you.

Those cab forwards have always looked "wrong" to my eyes. Bet the crews loved them - not having to wear respirators in tunnels for one.

Hope you had fun! Love those engines.

LSP
Nothing stirs me quite like a steam locomotive.I lived along side the Denver & Rio Grande tracks until I was 16. An early memory, during the Korean War, was seeing three steam locomotives pulling a mile long train loaded with tanks and other armored vehicles struggling up the 2.5 % grade at Pinecliff, CO. Two more steam engines were at the rear as helpers.