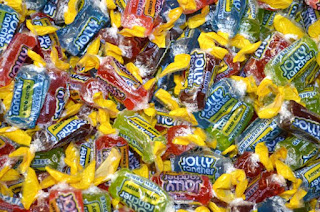 LL talks about Jolly Rancher candy, which brought to mind a memory.

The US Army in Afghanistan gave the troops Jolly Rancher hard candies for them to give to civilian children (hearts and minds).

When my son was in Kandahar, I sent him a “CARE” package with items to make his life easier. Along with camper items, I included a wrist rocket. As a teener, he had one and was the terror of our neighborhood.

His buddies found a new use for the wrist rocket. As they traveled in convoys, the local urchins would stand by the roads and throw rocks at them. The gunner in my son’s truck would distribute Jolly Rancher candies to the urchins using the wrist rocket.

When he came home, he left the wrist rocket behind. Perhaps it is still being used to win hearts and minds.\

I've been blogging here for several years and just this month went over 500,000 page views. Some of you do that i a month, or at least a quarter, but I'm humbled that anyone finds my posts entertaining enough to come back. Thank all of you.

Posted by Well Seasoned Fool at 11:28 AM

Had a friend who was always gung-ho for Jolly Rancher, as they supported a couple of NHRA drag cars he really liked.

I didn't care for them much, but I can see where they'd make excellent less-than-lethal, biodegradable, "small arms" ammo.

I've never been much of a candy eater. Per my son, they would leave a welt or lump.

Too funny, but it worked, and the kids 'learned' a lesson. I sent bags of Starbright Mints (Peppermints), they got used to get info from the kids that was better than what they were getting through interrogations... LOL

drjim
I read that M&Ms were developed in WWII to withstand tropic heat.

Congrats on the 500k! And of course your blog's worthy of far more. In the meanwhile, like the wrist rocket psy-ops case study. Nice.

LSP
The wrist rocket was one of the unexpected outcomes of the care package. I envisioned rats and other ordent. In one respect, that is what it was/maybe still is used for.

Thank you for your comments.