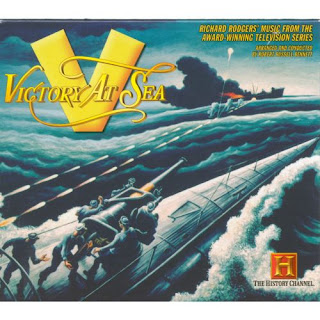 One of the first television shows I remember watching was Victory at Sea.

Circa 1952-1954 my Dad was the Section Forman at the East Portal of the Moffat Tunnel on the Denver & Rio Grande Railroad. At an elevation of 9,200’ ASL in a deep valley, the tiny town of East Portal had no television reception. AM radio was full of static and only a few 50,000 watt stations could be heard. 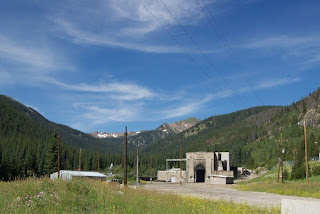 My Dad had a sister and brother-in-law living in Wheatridge, CO west of Denver and they had television reception. When we visited I was fascinated by Victory at Sea on their tiny black and white television set.

Browsing YouTube I’ve come across episodes. They don’t fascinate me like in my youth but do bring back memories of riding two hours in the back of a 1951 Ford just to see television.

Times change. That handheld device that rides in my pocket will let me see anything nearly anywhere, except East Portal. No cell service there.

Posted by Well Seasoned Fool at 9:45 AM

Growing up close enough to Chicago to get a decent signal, we had TV from the earliest days I can remember. And one thing I do remember is Sunday afternoons, when "Victory at Sea" was broadcast. My Dad would intently watch the show, sometimes commenting that he was close to some of the battles, and could see the gunfire from The Big Ships light up the sky like a lightning, and then the sound would come rolling in, like thunder. It was just about the only time he talked about The War.

I have the series on DVD, and several CD's of the soundtrack. Very impressive series, and the first real documentary to be shown on television.

My Dad's brother-in-law was a Navy Gunner on a merchant ship. He made one Murmansk run. Later the ship had problems while on a Pacific voyage and put into a harbor in Peru where they stayed for several weeks.

My father served in the CBI but in the process of going and returning to the USA, he crossed the Equator in the Pacific, Indian, and Atlantic oceans. I don't know Navy customs well enough to know what that means.

Back in my Navy days when we would get topped of on oil by an oiler servicing us, it was business as usual. But if we were alongside the carrier, sometimes they would have the ship's band perform for us. A few times we would serenade them over our sound systems with the Victory at Sea recordings.

Once we played it for an oiler who rewarded us with a few gallons of ice cream as thanks.

I, too, enjoyed watching the VaS on our tellie. And a few times, just before sunset and the see was rolling, I got to see the real thing that was shown in the opening of each show. Just leaning on the rail remembering home.

The might sea rolling along and giving us plenty of movement in return.

CP
As much as I enjoyed the show, when it came time to join I decided to walk to work. My trip from Brooklyn to Bremerhaven on a "cruise ship" made me glad I didn't go Navy. While I didn't get sick, I was bored. Me + boredom = trouble. Worse, that nine day trip turned out to be fourteen days. Tom O'Connor and I ran out of smuggled booze.

And it makes me wonder, there I was in 1970, raised on a monumental war that was only 25 years old and with it, all the values of the generation that'd fought it.

LSP
In my extended family, probably half of the males of the following generation served. Partly because of the draft (pick your poison). From my generation to the next, still around 25%. Today's armed forces are much smaller in numbers and the entry standards far higher.

What does it all mean? Don't know, but my gut feeling is there is a solid core of patriotism in this country.

The more things change, the more they remain the same... sigh Friend of mine's wife (early 30s) never had TV growing up (they lived in a remote part of south Texas). She rode the bus three hours each way to school, first time she saw TV on any kind of regular basis was in college. She is now hooked on TV Land! LOL

OldNFO
The woman I married grew up in Denver hooked on TV. Turned it on in the morning and left it on until bedtime. I could take it or leave it.We always had a top of the line one; happy wife, etc.