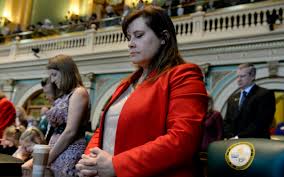 Back in the day she managed one of the car lots I supervised. Across the street was a radio stationed run by a “conservative” who got her involved in politics.

A side note. In the car biz, “Kink” has nothing to do with sex. Rather, the way someone negotiates a car deal. Sister Kink was unable to work any car deal without putting some vicious kink in it, hence my name for her.  She did chafe under my benevolent management style

You will not find a harder worker than her, all of 5’, and the willingness to do what it takes to succeed. She lives the words of the car biz immortal, Jackie Cooper, “Winners do what losers won’t”.


She has been the subject of a previous post involving her taking a firearm through security at DIA.

The General Election should be a breeze for her. The Democrat opponent is an enemy of the oil and gas industry. Not a winning strategy in the 20th largest petroleum producing county in the USA.

Posted by Well Seasoned Fool at 11:02 AM

Good to hear you've got some decent people on your board.

You have a listening ear in government, friends in high places. And you have dirt on her. Excellent.

LL
Friends in high places? The woman hates me! Dirt? She never showed cleavage unless she was selling to an unaccompanied man. The closer she got to a deal, the more buttons got undone. About the third "pencil" (offer) she would be standing, leaning over the desk in front of the sap, and pointing to the proposed payment saying, "That is your payment; you can afford that, can't you?"

drJim
She has a 100% rating by many conservative groups. She also has the ethics of a starving piranha.

OldNFO
That she does.

Do you think Kink could swing me a sweet deal on a 1975 Chevrolet Monte Carlo? And one with not too much rust?

Fredd
Certainly. A sweet deal for her. You, not so much.