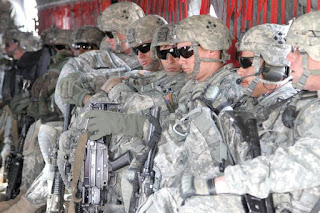 Once again WSF goes charging into a subject he knows little. When has that ever stopped me?

A few years ago at my son’s home outside Ft. Carson, I picked up his vest and helmet. “Damn, that is heavy”, I exclaimed. My son just laughed. Said he would add ammo, water, and his medic kit plus weapon before he went to the field. Well over 120 lbs.

Stud Marine Infantry officers must pass a grueling test. The requirements vary depending on the source. My question is, how effective can you be after humping 120 lbs. at a high rate of march?

Over time the wear and tear can be debilitating. We humans aren’t built to be pack animals and, over time, no amount of guts and determination will change that.

All kinds of mechanical devices have been used or proposed. 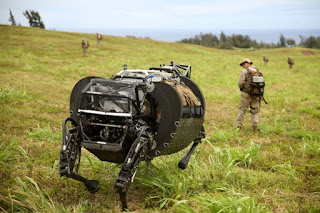 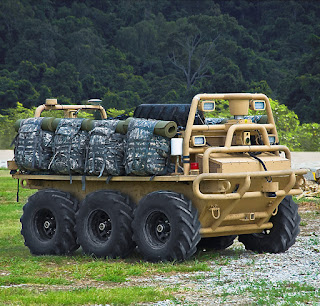 One problem, the logistics trail. 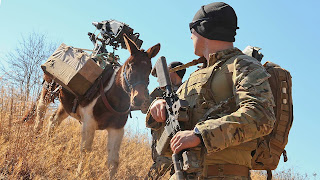 Anyone who has ever used pack animals knows it isn’t simple. Think only soldier’s have attitudes?

Is one answer been around for centuries? The Asian wheelbarrow. 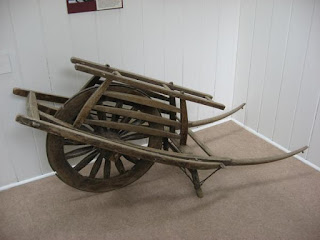 My guess one of these per squad would allow a lower load out weight while still having all the necessities close at hand.

Some tactical training would be required. Not having nearly exhausted troops in a firefight would be the gain, IMO.

"When Camargo was reached, we found a city of tents outside the Mexican hamlet. I was detailed to act as quartermaster and commissary to the regiment. The teams that had proven abundantly sufficient to transport all supplies from Corpus Christi to the Rio Grande over the level prairies of Texas, were entirely inadequate to the needs of the reinforced army in a mountainous country. To obviate the deficiency, pack mules were hired, with Mexicans to pack and drive them. I had charge of the few wagons allotted to the 4th infantry and of the pack train to supplement them. There were not men enough in the army to manage that train without the help of Mexicans who had learned how. As it was the difficulty was great enough. The troops would take up their march at an early hour each day. After they had started, the tents and cooking utensils had to be made into packages, so that they could be lashed to the backs of the mules. Sheet-iron kettles, tent-poles, and the mess chests were inconvenient articles to transport in that way. It took several hours to get ready to start each morning, and by the time we were ready some of the mules first loaded would be tired of standing so long with their loads on their backs. Sometimes one would start to run, bowing his back and kicking up until he scattered his load; others would lie down and try to disarrange their loads by attempting to get on the top of them by rolling on them; others with tent-poles for part of their loads would manage to run a tent-pole on one side of a sapling while they would take the other. I am not aware of ever having used a profane explicative in my life; but I would have the charity to excuse those who may have done so, if they were in charge of a train of Mexican pack mules at the time."

Yes sir! I've read that report and Grant was being charitable. My father made our winter eating money guiding hunters in NW Colorado. I couldn't tell you how many pack trips I made. We had exceptional pack animals. Even then, it was an all day bitch as the mule competed with two of the horses for "leadership".

Better than the Asian wheelbarrow would be a game-hauling cart. Less than 20lbs folded, capable of over 250 to 300lbs easily. And designed for wicked nasty terrain.

Back in the late 50's and 60's, the US had a nice little gas-powered, 4wd frame cart, the M274 1/2ton 4x4 Utility Platform Truck, aka: Mule, that basically did everything the above critters do now, except required a driver. They even mounted a 106mm recoilless rifle on them, and they were fun to drive.

Fast forward and add some 21st century stuff, and you could have a nice, low cost version for most every need. Self-driving robot mode, multi-fuel hybrid, some really nice self-sealing or run-flat balloon tires to add flotation or at least low-ground-pressure.

And as to weights of stuff the infantry has to or wants to carry, well, guys who hump all their own stuff are either special forces and have to do it for weird insertion missions or light infantry and shouldn't be carrying 180-200lbs total of miscellaneous war-fighting stuff. We need to work on re-evaluating the role of our 'war-fighters' and what they absolutely need to hump around.

The standard load out tor SEAL operators used to be 95 lbs. Team One, determined to show they were tougher, had a 110 lbs load-out. I don't know what it is today, but I can't think that it's much lighter. Since you have to carry everything you plan to shoot with you (no likelihood of resupply), it's necessary heavy. Just heft a Barrett 50 and you'll get the point as well. It's not a job for old men.

Beans
Didn't think of the game hauling cart. The M274 still requires a logistics trail. Does it seem the military is always focused on "near peer" warfare with insurgency fight a necessary sideshow?
LL
Our Engineer Company didn't do road marches often. When we did we humped the four M2s were were assigned. I've personally carried the receiver ten miles on my shoulder with just a towel for padding. Yah, not a job for old men, or even small men.

LL will agree that one of the benefits of being in an irregular cavalry unit is not having to run about with an enormous bergan (ruck). Then again, the mules are a right menace.

Coffeypot
Easier to push 100 lbs than hump 100 lbs. I'm glad I walked to work. All that swabbing decks would get wearsome.

WSF, today there is the M3 Multi-Role Anti-Armor Anti-Personnel Weapon System" (MAAWS) or "Ranger Anti-tank Weapons System" (RAWS). The Carl Gustof recoilless rifle is now TO & E for Army units. So in addition to machine funs, Barrett sniper rifles and all the ammo, there is the RAWS, which is in Navy inventory for SEAL units if the mission calls for them. They're cool. They work. They're lighter now than they used to be, but the guy who humps the Gustof still carries a lot of extra weight. As you say - big guys.

LL
Rough and tough is desirable but being fit to fight often means rested. Pushing a load instead of humping it is more efficient from an energy standpoint.

Anon
Your comment was deleted because it was off topic. Secondly, have the guts to put your name to your opinions.

LL et al, as of three years ago, 'normal' SEAL loadout was 120lbs. That was for a three day mission. And you have to remember that the VC moved multiple heavy items up and down the trail with bicycles!

Old NFO
Just because you can hump a big load doesn't mean you should.

True, but when you're getting 'dropped off', that can mean the difference between life and death.

Very true. All I am suggesting is a better way.