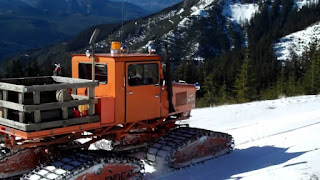 Seems several bloggers are writing or commenting on cold weather. Guess I will jump in.

After leaving the Army in 1966, I was determined to earn a pilot license. I tried to get in the Army aviation program but a couple of evaluation rides showed I was unlikely to become adept at hovering a helicopter. There were even fewer slots for fixed wing training.

While visiting my parents, I was alerted to a company conducting an experiment to see if seeding clouds would increase snowfall.

A component was a string of recording devices strung along thirty miles of the Continental Divide at 10,000 to 11,000 feet. They wanted local people who knew how to operate in harsh conditions as the equipment needed to be operational while it was snowing. One of the people hired along with me had been a year ahead of me in high school. In high school we loathed each other. A few years later our feeling hadn’t changed. That said, we both knew how to work and survive in blizzard conditions.

These storms could be intense. We used a snow cat to go from site to site. Often the visibility was so bad one of us would go ahead on cross country skis to find the way. The other would drive the machine following the skier.  The temperature would always be below zero and the wind was gusting so hard the skier would nearly be blown over. We never calculated the wind chill. Fear!

The wonderful part of the job was I only was required to work when it was storming. That left clear days for flying. My father had always wanted to fly and we went in together on a 1939 Piper J-4, known in the family as the Puddy Four. We both got our Private rating in her. I went on to get a Commercial and Instrument rating.  He later bought a Cessna 182. 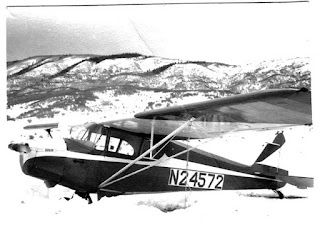 This seeding experiment was a large effort. To the West on a high ridge was a decommissioned Nike Ajax radar setup for tracking the chaff filled weather balloons. Further East on a high peak was the seeders. Sodium iodine was mixed with acetone and fed into small fan devices with propane burners. During a storm, the burners would run for thirty minutes, shut down for thirty minutes, etc. The data from the recorders along the divide was analyzed to see if there was a pattern.

This project ran for four years. I don’t think anything was proved but the people doing it were meticulous in their efforts. As an aside, several marriages with local girls were a byproduct. Those long cold winter nights, don’t you know?

The time spent with the asshole from high school didn’t change our feeling towards each other. There was a mutual, if grudging, respect for each other’s skill set. Our literal survival depended on it. That job was far and away the most dangerous one I’ve done. As I understand, he worked there all four seasons. Tough man to be sure, but an asshole’s asshole. A good friend from high school who still lives in the area and is friendly with him assures me his feelings toward me are about the same. Oh well.

Posted by Well Seasoned Fool at 12:25 AM

So on those long, cold, lonely nights you two didn't kiss and make up? You never know, it could have made you a different man.. more loving and understanding.

Three years in the Army gave me the ability to work with about anyone.

Our history involved the affections of a young lady. He also believed he was several steps above me socially. Didn't help as a Freshman I kicked his Sophomore ass until a teacher saved him.

He has made quite a name for himself as an outdoor adventure guide. Dude wrangler.

Heh, yep military training DOES do that. And teaches you how to survive!

Focus on what is critical and leave your ego in the truck.

These kinds of feelings ('loathing') don't just happen out of thin air.

There was clearly a reason for this loathing. Allow me to guess:

1. He/you stole your/his girl friend.
2. He gave you a wedgie, noogies, or other token of disrespect
3. He got the starting position over you, and you rode the bench in basketball/football
4. He stole your lunch money
5. He/you was/were better looking than you/him.

C'mon, Fool, clue us in. Why did you guys hate each other? There had to be a reason.

He was from a prominent, and well off, ranch family. Local aristocracy if you will. I was the new kid from the wrong side of the tracks (literally, when we moved there my father was the railroad section foreman). He was part of the bulling snobs. Had to kick his ass more than once - him and his older brother.

Forward a few years, he had "claimed" a young lady of his class and status. She started going to the movies with me.

At some point after we moved there his father and my father had "words". Politics may have been involved. My father wasn't one to "accept" his proper position with the local social structure.

At the time, the town was a small isolated county seat with a shaky economy. Think of a social petri dish.

Got it: bad blood. Happens in small towns.

PS: especially if your old man starts to get 'uppity.'

'Uppity' is too mild. However, his mouth had a filter that his son didn't inherit.