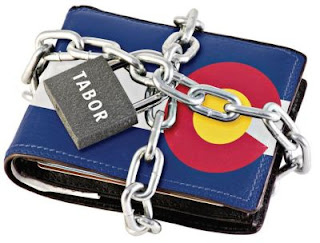 Colorado is unique in having added to the  Constitution the Taxpayers Bill of Rights (TABOR) in 1992 only to suspend it for five years in 2005. Fighting for and against TABOR has kept scores of lawyers gainfully employed along with the lobbyist and special interests folks funding lawsuits.

The basic principal of TABOR is all levels of government in Colorado are restricted in spending (and raising taxes) by a formula involving inflation, population growth, and tax revenues. The goal is balanced budgets and curbs on unnecessary spending. Increases must be voted on by the public, not elected officials. There is even a mechanism for refunding excess tax revenues back to the taxpayers (seldom happens).

The (P)regressives loath TABOR and are ever trying to circumvent it. Seriously curtails their ability to spend other people’s money for their pet projects.

An unfortunate side effect is the harm to necessary programs and projects. As in, there are no perfect answers, only intelligent choices (ha, faint hope there).

May I introduce Dave Perry, Editor of the Aurora Sentinel, a shopper ‘newspaper’ from a Denver suburb, trying to compete with the Denver Post for relevancy. He is extremely fluent in (P)regressive speak. Reading his editorials makes me wonder if we inhabit the same planet.

Concerning the just past Special Session of the Legislature that accomplished nothing, here are a few quotes from his editorial as he hits many (P)regressive talking points.

critical state services hurt by the Great Recession and a dangerous GOP obsession with the so-called TABOR amendment.

These misled and misleading fans of infamous and felonious tax-protester Douglas Bruce, who authored the broken Colorado Taxpayer Bill of Rights Amendment, hold the majority of the state GOP hostage by threatening to invoke a vengeful base unless they get NRA-like compliance.

but their puerile, anarchistic view of TABOR continues to hurt every corner of the state. We frequently remind readers that not one, single state has ever created its own TABOR, seeing how fatally flawed it is.

Lawmakers will return in January and voters will closely watch them and decide next November who runs the state. Unless these GOP partisan bullies change their ways, Colorado can’t tolerate any more of their scams.

One GOP representative I know says the Democrat leadership defines bi-partnership as letting the GOP members take their seats.

I am sick of it. I’m sick of seeing these bullies dare America to stop them from toting weapons meant to stop military armadas to Walmart in case some other gun-freak loses it in the express lane.

Isn’t it wonderful we have the 1st Amendment?

Posted by Well Seasoned Fool at 6:55 AM

Geez, that guy's a real asswipe!!

You are being too kind to him.

Thanks for the explanation of TABOR.

I've been seeing references to it now that we live here, and it's one of those things I'm sure I'll learn more about.

As for Da Douchebag? Let him rant. The only thing that pisses me off about it is when they try and silence "our" side....

Fairly superficial TABOR explanation. Google is your friend. TABOR and the 2016 Amendment 71 passage has thwarted the (P)gressives, backed by outside money, from turning the state into a deficit hellhole. In the process, some vulnerable groups have been hurt. Always a trade off.

Running a balanced budget for government make the same sense as it does for us personally. I realize that's a politically incorrect concept.

One way ticket to a FEMA camp if some elements gain control.

But once re-educated, you'd love Big Brother (or Big Sister if Hillary ran the show). See, I'm a glass-half-full kind of guy ;^)

Twatwaffle? I lost all my senses just in shock that you would use such a hipster word. LOL. You do realize Colofornia is not Colorado, right? I don't like that Perry guy one bit.

"The (P)regressives loath TABOR and are ever trying to circumvent it. Seriously curtails their ability to spend other people’s money for their pet projects.

An unfortunate side effect is the harm to necessary programs and projects."

Hold on there, Kimosabe. The programs that 'they' want to spend money on are 'pet,' while that spending may starve what you consider 'necessary programs and projects.'

That, in a nutshell, is what politics is all about. What you consider necessary may be called a pet project by your opposition. And vice versa.

No need to clarify to me whose projects are pet and whose are not, I would weigh in on your side every time, Fool. But as anything, what defines pet projects are in the eye of the beholder.

LOL Well, I would read you even if you titled it that or left it blank for curiosity sake. haha

Heh... I love it when the left gets their tits in an uproar when they don't get their way...

Lil' Davey has his _____ in a uproar constantly. Surprised he doesn't stroke out.