Bad Day For A Car Guy 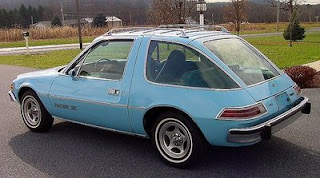 A trip down memory lane.

The Salt Lake City Car Show was opening and AMC had shipped in by rail one of the first AMC Pacers. AMC  sent one West  just for the show.

My friend picked it up and had it toughly cleaned and polished then drove  to the Salt Palace for the show. Three blocks from the Salt Palace he was t-boned by a red light runner.

An omen for what was to come?

Say what you will about the Pacer but know it was an innovative design for the times. Designed to be powered by the Wankel rotary engine that never saw production, the car was designed for urban environments. The doors tilted out from the top for easier exits in cramped parking spots. The passenger door was wider than the driver’s door for easier back seat access. All that glass was to minimize blind spots.  It was built to a much higher safety standard than was required at the time.

Posted by Well Seasoned Fool at 11:24 AM

The AMC inline six was/is damn near indestructible. I've seen a couple that were "restomodded" with V8 engines and tricked out suspensions.

Heck, "Wheeler Dealers" even rescued one and brought it to Las Vegas.

That inline six inspired the MOPAR slant six and the Jeep 4.0L. Before everyone jumps on my, I suggest you see all the commonality of internal parts.

The Pacer drove no better or worse than it's competitors IMO.

The Pacer suffered the same fate at the Edsel: lots of great design features, but with one fatal flaw that doomed its legacy: it was butt ugly.

To paraphrase an old Maytag line, "The quality comes out before the name goes on".

It also tended to get a little light weight (lift up) in a strong wind or high speeds. But it was a good prop for God & John Denver.

I'd forgotten that - about the wind.