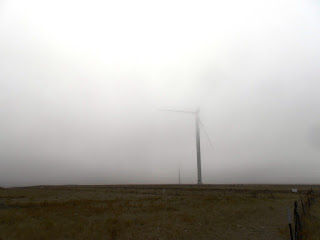 For what this 100+ windmill project cost, four state of the art coal or natural gas could be built. Or, gasp! Nuclear.
Posted by Well Seasoned Fool at 3:37 PM

And the lawsuits over 'noise' and bird kills haven't even started...

Not a wildlife expert but talk to those who are. The spread of oil infrastructure on the planes gave raptors places to perch and not use energy flying. The snake population dwindled as a result as a snake is a lot more food than a rodent. Now rodents are moving in under the windmills that give them shelter against raptors.

Yes. Waste of government subsized projects. They made the companies rich, poluted our view and did not produce promised energy accordingly. Big gubbermint joke.

Lots of jobs when they are constructed. Damn few once they are up and running.