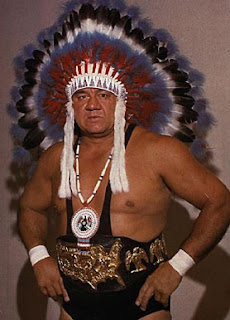 Downtown Denver once had the Stockmans Hotel, a large place that took up a city block. The “ballroom” was huge and was the venue for wrestling and boxing. It would seat upwards of 3,500.  Off and on during the 1960’s I worked security. Our job was mainly tossing out drunks.

One night two wrestlers who hated each other threw away the script and went at it for real. I think wives/girlfriends/mitresses were the cause of the hard feelings. They were pounding the shit out of each other. The promoter came running up to my partner and I.

“Get up there and stop them”, he ordered.

Finally there was a winner. After he left the ring, we willingly got in the ring and assisted the loser out to an ambulance. Weren’t we nice guys?

The only wrestler I remember from those days was Wahoo McDaniels, who also played for the Denver Broncos. A very nice gentleman but I wouldn’t have wanted to irritate him.
Posted by Well Seasoned Fool at 3:30 PM

I was a Fritz Von Erich fan.

Scripts? We don't need no stinkin' scripts... :-) I wouldn't have gotten in there either!!!

In my vast travels (around Atlanta) I ran into several pro wrestlers. I was amazed at how big thy were, and even more amazed at how nice and friendly they were. Even 'The Bad Guys' would take the time to talk to people, especially kids. They would even laugh when the kids would bad mouth them for being the bad guy in the ring. Like pro football players, I cannot imagine having to deal with them doing their job.

My kids were big fans when they were younger.

We didn't get paid enough to handle that kind of risk.

We worked security at the Bronco games. Some of the visiting teams were great (Raiders, Bills). Some were low lifes (Chiefs, Oilers, Chargers). The worst were the Broncos themselves. A few good guys mixed in with jerks.