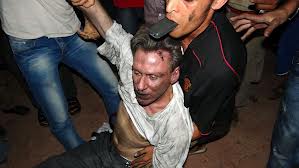 Give the MSM Maggots credit, they never stop repeating the lies. From

The lies is in the middle of the article.


His broader point comes just months after an anti-Islam video made in the United States sparked outrage and demonstrations across the Muslim world. The movie sparked efforts at the United Nations to criminalize blasphemy.


The author? From his LinkedIn profile.


As to the headline, Captain Obvious.

How stupid is it for America to have Kerry as Secretary of State?

Another "authorized journalists" in training? AKA, usefull idiots.

Posted by Well Seasoned Fool at 9:57 AM

Frikkin pathetic... That is the best I can say for that traitor...