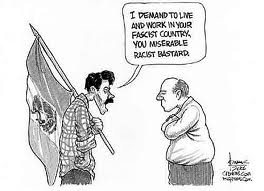 Aside from “gun control” the big whoop with the political and chattering classes is “immigration reform”. The assumptions these light bulbs make astound me.

The illegal’s are already here and making it, prospering, whatever. What makes anyone think they, other than a few, are going to put themselves out, especially if it costs them money, to comply with some law? What the hell; they are already law breakers. Why would they suddenly stop? Does anyone really believe these criminals give a shit about this country, or it’s laws?

Who wants to get their name put on some list? That is somewhat akin to asking firearms owners to voluntarily list their collections with the ATF.
Posted by Well Seasoned Fool at 7:31 PM

Agree completely... and it's NOT going to improve the situation...

Yeah, but it's worked so well in that past!! /s

@ NFO. Not to mention the new layer of bureaucracy need to run the programs.