This Is So Wrong 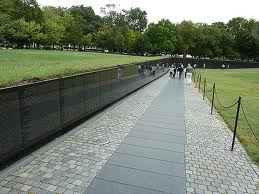 For people around my age, the Vietnam War was yesterday. I was sent to Germany; lucky me. Our Stars and Stripes newspaper printed the casualty lists. Grim reading.

The anti war sentiment seemed to be expressed by  fucking over veterans. They, and the people who loved them, were subject to discrimination, belittlement, and ostracism.  Much of that has died down  but still exists.

So, this past Memorial Day, the Vietnam Memorial was closed to the public for seven hours. This was to allow our President to make a fifteen minute speech.

Such loathsome, insensitive, callous and cynical disrespect tells me our President, and his circle of advisers, need to go away. That Memorial belongs to the people. That day, Memorial Day, is deeply meaningful to many people. To be used for a damn  political stunt is so wrong that I can’t find words to define it.

Thank you, Mr. President, for pissing on all who served.

Posted by Well Seasoned Fool at 9:48 AM

But Obama's a REAL SMART GUY!! I read it in the papers!

And I'm sure that he meant every word of his speech. Probably didn't even need a teleprompter to sound commanding.

@ Ami. I must be one of those bitter clingers.

And apparently he was only there 15 minutes... What an asshat...

@ NFO. You are correct. So much for the promise to be President for all the people.