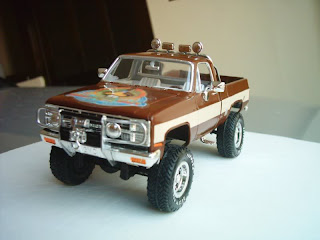 My late father enjoyed taking people hunting. For several years, he was a professional guide. After he remarried in 1984, he acquired a new set of relatives to take  hunting.

One of the new relatives was “Lou”. He was affluent enough to have hunted all over the world and had numerous trophy mounts in his large den. Lou’s wife wasn’t a hunting fan. There was a sense of friction between them on the subject of hunting.

While out with my father, Lou managed to shoot a hole through the bed of my father’s new 4x4 GMC pickup. Can you say, “Four Rules”?

Lou’s wife paid a modeler for a model of the pickup, painted appropriately, with tiny holes in the correct places. She had the model trophy mounted and hung in Lou’s den.

Sounds to me like he earned it fair and square!

Pens Of The abyss said...

That is great. Muzzle control? lol

Oh THANK you, I just snorted coffee laughing at that one... :-)