THIS is a CADILLAC 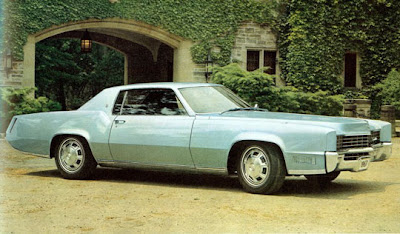 We were swapping stories at the early morning senior coffee McDonalds meeting.

The topic was winter driving and inept and ignorant drivers. Everyone at the table was, of course, a total professional. My contribution.

Prior to Interstate 70, going west from Denver you had two choices, US 6 or US 40. They merged from just East of Idaho Springs to just West of Downeville where they split. Drivers could then choose 11,990 foot Loveland Pass US 6 or 11,307 foot Berthoud Pass US 40.

Downeville had a large and prosperous gas station with a large service shop and wrecker service. Many drivers would stop there and have their tire chains installed. The workers would put the vehicle on lifts making installation easier and faster.

One winter evening in 1968, I stopped in Downeville for coffee, before going West over Berthoud Pass, and noticed a shinny black Eldorado up on a lift. The mechanic was putting chains on the rear tires. The owner was closely watching.

Being a helpful sort of smart ass, I pointed out the Eldorado was front wheel drive.

“Young man”, said the owner, “THIS is a CADILLAC!” Behind the owner, I could see the mechanic give a slight shrug. “Oh,” I said and kept on walking, leaving the damn fool on his own.

Advice for those who have never used tire chains. If you have access to an air hose, or a station with one is nearby, let some air out of your tires. Put on the chains as tight as you can by hand then air up the tires.

Oh, and know which of your wheels are powered!
Posted by Well Seasoned Fool at 8:31 AM

@ Old NFO My father had a first year Toronado that he drove close to 300,000 miles. Every two to three years he would have either the interior redone or a new paint job. With studded snow tires on all four wheels, there were no weather conditions that stopped him.

With studded snow tires on all four wheels, there were no weather conditions that stopped him.

Having moved from upstate NY to Florida about 12 years ago, the sound of studded snow tires making those awful noises when running on a dry road, is another thing I don't miss having to hear anymore!

Like a lot of people, I've owned a lot of front wheel drive cars and in all those years I never ran a snow tire of any configuration on them. I never had a problem and NY can have some pretty stout winter conditions.

@ Scotty Agree with you about the noise studded tires make. I run mud+snow tires year around but haven't used studs for several years.

Given the places my father drove, and the way he drove!, the studs added utility and safety.

If available, he would have had them on his Cessna 182.

WSF- Yep, I used to put chains on all four tires on my GMC pickup when I went up 50 to Tahoe in the winter... Never got stuck, and pulled quite a few (including two troopers) out of snow banks.

@ Old NFO Always fun to help out the Police:)