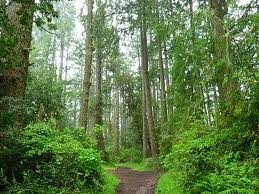 One blogger I follow sends out occasional humor emails. A recent one had some huge business blunders which reminded me of a not so major blunder I participated in.

When the US Navy started building Sub Base Bangor on Hoods Canal in Washington State, one of the first projects was 100+ units of family housing. Basically, a condo project.

Like forty or more bidders, my company was a player. When the bids came out, Morrison Knudsen, Boise, ID was low bidder by 5%. MK??? Highways, bridges, airports, big projects were what they were known for.

Turned out we all over looked the timber rights. We saw all the damn trees that needed to be removed. Someone from MK saw a prime stand of old growth Douglas Fir.

You can guess the rest. MK sublet the entire project to us dumb shits, including the logging (there are a few logging companies in the Pacific Northwest), shuffled paper, and made a fat profit. We took the crumbs.

In later years, MK fell victim to their own mistakes.

Hope I never forget the lesson of not seeing the forest because all the trees are in the way.
Posted by Well Seasoned Fool at 4:20 AM